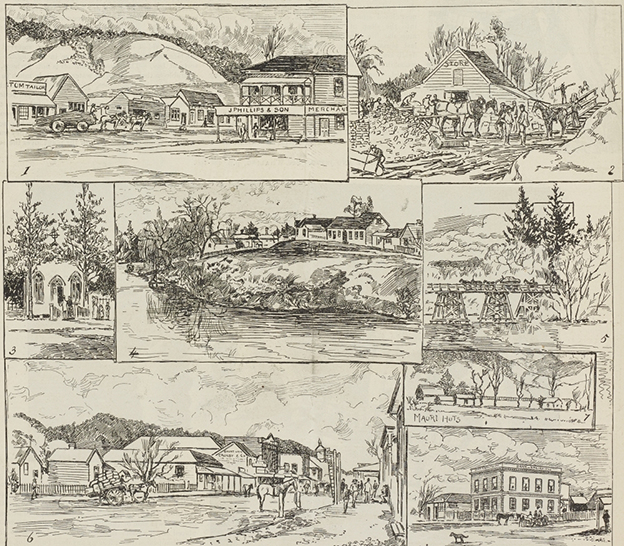 1881
The good people of Paeroa were in a state of excitement over the disappearance of a plum cake intended for a school feast. Several residents had busied themselves in supplying edibles for the young people’s enjoyment, and the cake, which had cost more time and attention than the rest, was set aside for the adults who had prepared the festivities. When it was found to have disappeared altogether cries of “Who stole the cake?” reverberated around Paeroa.
At Puriri, the Ehrenfried brothers were about to build a large and commodious hotel. The greater portion of the timber was on the ground and a gang of men were busy digging a roomy cellar. The hotel, when completed, would contain fourteen rooms. Also at Puriri Edward Gallagher had laid on a line of omnibuses from Thames to Hikutaia. Mr Gallagher had, despite the bad state of the roads, kept up weekly communication by his drays with Puriri, and when the fine weather set in he would lay on lighter carriages.
A traveller riding around the Thames Coast had much to say on the condition of the road. After leaving Tararu it swept boldly round the bluff known as Rocky Point. This portion was only one dray wide. The grade, however, was good, enabling riders to spin along at a round trot, occasionally dismounting and walking over the round beach stones which, being inclined to roll had to be trod on gently. The dray road degenerated into a horse track rounding the steep bluffs, where narrow sidling tracks were cut. The Puru and Waiomo creeks had old single log bridges which were a great advantage for foot passengers but good substantial bridges were needed as a large amount of land had been settled in the Puru valley. After one and a half hours ride Tapu was reached, the worst part of the road this far being the cuttings round the bluff, between the Whalebone Creek and Tapu, where the track was very narrow and a danger to horsemen, the hard rock being bare and slippery. The inside wall was perpendicular and the outside nearly sheer down to the beach, which was wild and rocky – a tumble would result in the certain destruction of man and horse. Tapu had two hotels, kept respectively by Hosts Hawkes and Jacobs, and a peculiar population made up mostly of children.
At Thames, the police caught a ‘tartar’ but encountered some difficulty in detaining him. The young man was observed amusing himself by battering fireplugs in Pollen St. He was arrested but succeeded in eluding the officer in charge, and an exciting chase ensued. The culprit had the best of it for some time, the officer not being in form for running. The officer called upon an onlooker to “Stop him, stop him!” but received the reply “Stop him yourself; I’m not paid for it.” Things looked critical until the arrival of a constable able to out-pace the two, and the vandal was caught.