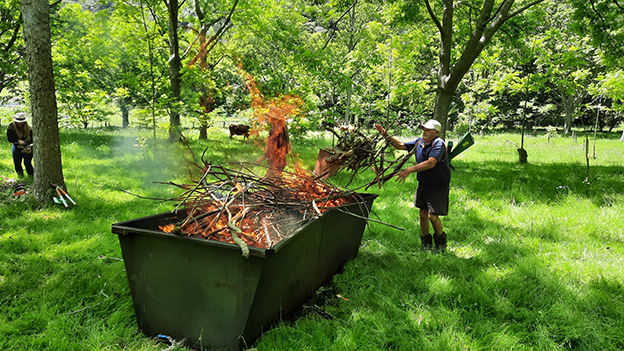 Max Laurie throws a pile of branches pruned from a pecan tree into the kiln to fuel the biochar. Photo: SUPPLIED

A charcoal with an array of agricultural and environmental benefits was created in a kiln up the Kauaeranga Valley last month, as orchardists, farmers, and forestry workers watched on.
Biochar, a fine-grained, highly porous type of charcoal that has been used for thousands of years as a soil enhancer, was the star of the show at a field day hosted at Harry Parke’s Pakaraka Organic Farm near Thames.
Landcare Trust’s Ric Balfour told The Profile local biochar “expert” Shakēd From led the day, inspiring workshop attendees to undertake their own biochar production at home.
“I knew a little bit about biochar, but seeing and hearing how many different ways it can be used – even just fed to cattle – was the biggest impression I had.”
Mr Balfour said biochar can be bought at the front gates of farms or at garden centres, but the workshop discussed the method and materials that could be used to make the charcoal at home.
“The fuel can just about be anything from branches, to prunings, to corn stalks or even dried grass. The main thing is that you’re trying to keep the charcoal intact, rather than turning it to white ash, which doesn’t have the properties biochar has.”
He said biochar could be made from a pit in the ground, but it could be more easily controlled using an old bathtub – an object he was planning to acquire to test out the process.
The hands-on demonstration during the field day had the attendees load a kiln that a group of landowners in the Kauaeranga Valley all chipped in to have made locally by Kōpū Engineering.
“At each stage, Shakēd explained the biochar production practices along with tips and tricks he had learned,” Mr Balfour said.
“Depending on the scale of the biochar kiln, it can be simple or more complex depending on the end use and the amount of fuel at hand.
“For our demo, Harry Parke provided a pile of branches from pecan tree pruning that had been sitting since last autumn and were dry enough.”
The kiln was lit and needed about six to eight rounds of feeding the flames before water was introduced to the bottom of the kiln – which helped “charge” the charcoal for its later release into soil, he said.
Charging the charcoal is done with a range of material including compost, urine, clay, and manure as a way of augmenting it into what is then technically biochar.
It then needs to sit damp for up to six weeks before it is applied to the soil, either directly or ground into fragments and mixed with stock feed or spread on the ground.

WHAT IS BIOCHAR?:
Biochar is a fine-grained charcoal that is high in organic carbon and resistant to decomposition. It is produced from heating (generally burning) organic materials to hot temperatures under oxygen limited conditions. The resulting carbon is stable and will stay in this form for hundreds of years. It is used to improve soil and has many uses including as a supplement to feed livestock to improve growth rates, lower methane production, and reduce drenching needs.
More information at: www.bnnz.org.nz.