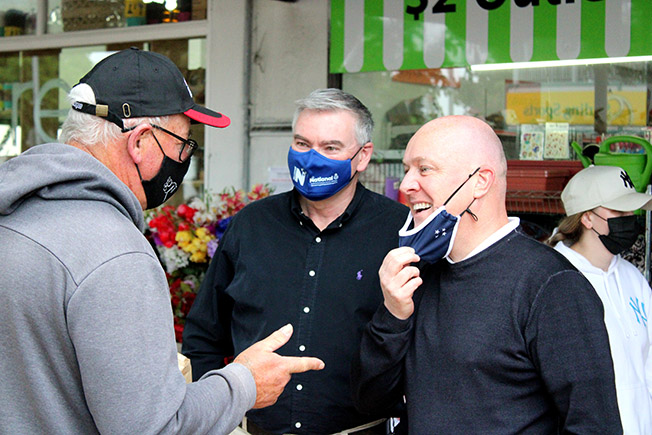 Before heading off to a National Party lunch at Gastronomics in Thames on Saturday, the new Leader of the Opposition, Christopher Luxon, spoke to The Profile about politics, his connection to the region, and his plans for Christmas.

If a Christopher Luxon-led National Party was in power tomorrow, the biggest issues he’d want to tackle would be education and infrastructure, with an ultimate end-goal to raise the country’s productivity.
Capping off his first week as new leader of the National Party, Mr Luxon sat inside Coromandel MP Scott Simpson’s office and spoke of his plans if successful at next year’s general election.
“The bottom line is New Zealanders are some of the hardest working people on planet Earth, we work long hours, but we don’t generate enough income to support the quality of life we want to have.
“That’s been the biggest challenge for New Zealand over the last 30 years, but if we can fundamentally lift our productivity, or the value of stuff we produce, we get higher wages.”
Mr Luxon said the “most startling statistic” he’d come across in the past 12 months was that only 60 per cent of Kiwi kids attend school regularly.
He said education was “a critical enabler” of social mobility, and also the ability to participate, and ultimately, get higher paying jobs.
“When you see New Zealand has slipped to the bottom of the developed country rankings for maths, science, and reading; when you hear issues about literacy… These are things I thought we always did quite well, but what we’ve discovered is our educational standards have been slipping, and as a result, that means a whole generation can’t participate in a global economy in the same way.”
Mr Luxon was elected National MP for Botany in the 2020 election. He was chief executive for Air New Zealand for seven years and previously acted as chairman of Jacinda Ardern’s Prime Minister’s Business Advisory Council.
The day before he arrived in Thames, the double-jabbed politician was pounding the pavement along Auckland’s Viaduct, speaking to business owners who had opened their doors after 107 days of lockdown. He said walking the length of Pollen St – during which he stopped to chat to passers-by – wasn’t much different than what he saw in the super city, with people utilising the new traffic light system to shop local.
“I used to come here a lot as a little boy because I belonged to something called Boys’ Brigade, which was a bit like Scouts.
“We used to come here most weekends and do hikes in this area, like the Kauaeranga Valley, and up to the Pinnacles.
“Likewise, I came here with the whole family for my mother’s birthday a couple years back, to Karangahake Gorge, so it’s a pretty special area,” he said.
And when it comes to the fast-approaching Christmas season, Mr Luxon, who has two children with wife Amanda, said he’d try to “find a beach somewhere” to spend the holidays.
“We’ve decided to learn to fish very badly, but it’s something [Amanda] and I do, go on a boat and put some lines over and try to catch some snapper.
“Not as good as many fishermen I’ve observed in this part of the country but we give it a go,” he said.