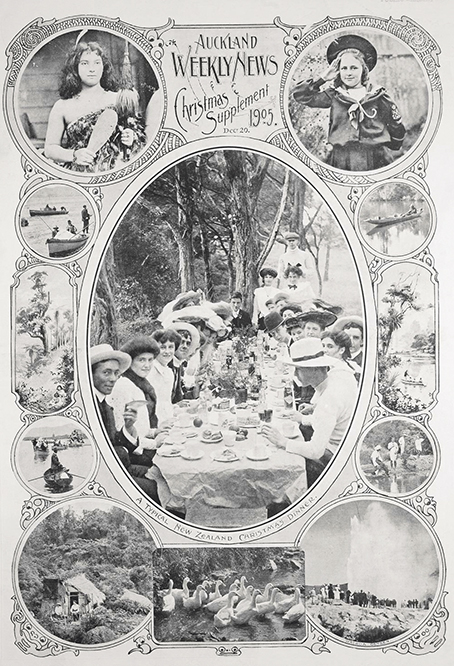 1928
A Kopuarahi farmer was left feeling flat instead of festive after taking a carload of shoppers into Thames on Christmas Eve.
As the payout for butterfat had been particularly good they were all in a spending mood. Thames, with its generous display of goods and most affable manner, wheedled out of them close to 40 pounds.
After a busy day they were content to get away home to the cows, thinking that Thames Town would be well pleased with their spending spree.
But “dash my buttons” cried the farmer, if it didn’t have another go at his much-depleted pocket, through the medium of the Borough Council, who nabbed him, not so much for speeding, as for disturbing the smooth surface of Jellicoe Crescent.
‘Bethlehem’ was the work chosen by the Methodist choir for their Christmas presentation. This was a Cantata – a vocal composition with an instrumental accompaniment, in several movements.
It was a work entirely new to Thames, recognised in musical circles as a classic. It opened with a scene on a starlit night on the plans near Bethlehem, where a shepherd was attending his flock.
Part Two began with a scene by an old well in the desert, and the sounds of an approaching caravan – a very descriptive organ effect. Part Three began in front of the Inn at Bethlehem. Soprano solos, distant choruses of angels singing, baritone solos and hymns magnificently illustrated the story.
The Cantata, which took over two hours, was of outstanding beauty, full of descriptive vocal work seldom heard outside the large cities.
A phenomenal rainfall in the Thames Valley which began late on Christmas Eve was considered both a blessing and nuisance.
It was beneficial to farmers initially but then became too much of a good thing. Paeroa was swept by almost continuous rain for three days.
At Thames, rain fell in increasing volumes making prospects for holiday outdoor sports grim. Market gardeners, especially strawberry growers, sustained losses.
Dozens of camping parties at Thornton Bay were flooded out and the roads were filled with cars returning to Hamilton and other distant points. The rain was followed by a hot spell of exceptional temperatures.
For a week the area sweltered under a moist heat from which there was little or no escape. At Thames, unusually high temperatures were registered when the thermometer stood at 87 degrees Fahrenheit (29.444 degrees Celsius).
In the absence of a public swimming bath, a proposed loan to build one having been rejected, residents found it difficult to keep cool. The beaches and river pools were crowded. The hottest day was experienced at Paeroa when the thermometer climbed slightly above 89 degrees Fahrenheit (31.667 degrees Celsius).
The recently built public swimming baths there were crammed every day.