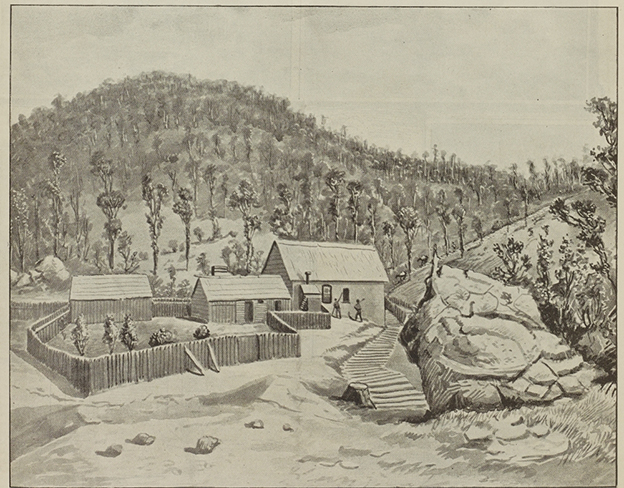 The sound of a falling tree during a Sunday night in November 1899 only slightly disturbed William Andrews of Neavesville. He had spent several busy hours that day with Ephraim Byrne, storekeeper and gum trader, who lived nearby before leaving at dusk. Silence once again descended over the night noises of Neavesville and he thought no more of it.
Early next morning some workmen were startled to come across the ruins of Ephraim’s store which had been levelled by fire. On looking over the wreckage they were horrified to discover the remains of Ephraim. His dog has also been killed. A message was sent to Puriri and the police sent for. After inspecting the debris Detective McMahon brought Ephraim’s remains over to Puriri in a small candle box.
At the inquest held at Laycock’s Hotel, Puriri, Mr Kemp stated that he had last seen Ephraim alive at 3 o’clock on Sunday afternoon. He was then in his store, and appeared in good health. He had known him for the past 12 years and lived less than 50 yards from him. Kemp was one of the workmen who discovered the remains of the unfortunate man. Ephraim’s body was not found where he usually slept and he was of opinion that he had tried to escape from the burning building. He had no idea how the fire originated; Ephraim was not in the habit of reading in bed. He had no reason to suspect foul play.
There were three huts near the store inhabited by gum diggers, and they were all friendly with Ephraim. William Andrews said that he now believed that the noise which he had thought was a tree falling had actually been the roof of the store caving in. Detective McMahon stated that the fireplace appeared to be a safe one, and was still standing. He had made inquiries, but had heard of nothing that would lead him to believe that the case was one of arson. There had been a quantity of gum in the store.
The verdict was given that Ephraim died in the fire that destroyed his store but there was no evidence to show how the fire occurred. Ephraim was 60 and had lived by himself for a considerable time. He had relatives at North Head, Devonport, and also several friends at Thames where he had once lived.
The fire was quite likely caused by the spontaneous combustion of gum but questions lingered. When Madame Heller, who specialised in Somnomancy, a type of clairvoyance, appeared at the Thames Miner’s Union Hall she was asked how Ephraim Byrne of Neavesville had met his death. She gave what were believed to be the true facts of the case, adding that he made a struggle to leave the burning building, but was suffocated and burned to death – details that were easily divined from local newspaper reports.
Ephraim is buried at Shortland cemetery.