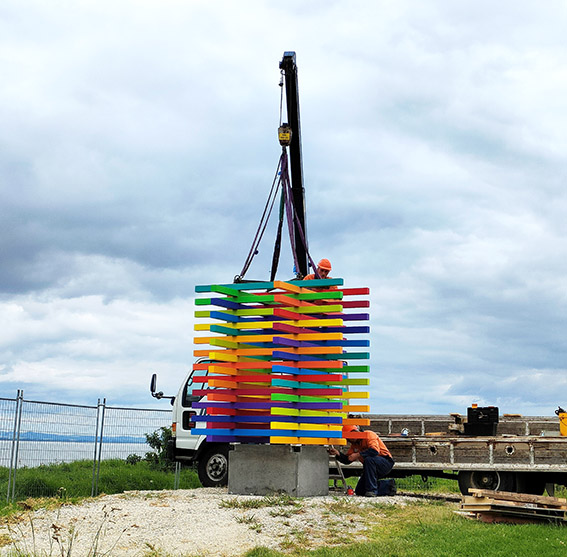 A sculptural ‘focal point’ along the Thames coastal walkway has been reinstated after high winds toppled it in early September. Photo: SUPPLIED

A popular and “way recognisable” Thames sculpture has been reinstated after high winds toppled it in early September.
The Colour Harmonics: Homage to Richard Pearse sculpture by artist Michael Smither was knocked over by rough weather and was removed from its location within the Burke Street Reserve, where it had stood for more than 10 years.
It was repaired, and with a new foundation by Watson Engineering and a new plinth poured by Thames Public Art Trust’s Paul Silvester and Rob Johnston, the sculpture was now stronger than ever.
“It’s perfectly stable. There’s no way that’s falling over,” Mr Johnston told The Profile.
Michael Smither’s colourful sculpture has been a focal point of the Thames waterfront for a number of years and was now “way recognisable”, Mr Johnston said.
“During the process of being down there and working, a lot of people were walking past asking when it was going back and what was happening. It’s certainly popular.
“It’s the only [sculpture] out there by Moanataiari, but you can imagine some more along there over time.”
The piece has been in the backdrop of many social media posts, and has become a form of play equipment, to some extent, but Mr Johnston said some sculptures were “begging” to be touched. “Some people think it’s a terrible thing to touch and climb on it, but my take on sculpture is that it’s definitely a tactile thing. It’s something that should be touched,” he said.
“I know ancient Greek marble sculptures don’t like being touched because of oils on peoples’ hands, but sculptures, in general terms, they’re not just for the eyes like a painting. I think, therefore, some of them are susceptible to being climbed on.”
In a post on social media, Thames-Coromandel District Council thanked Thames Public Art Trust and Watson Engineering for reinstalling the piece.
“The sculpture has been replaced on a new reinforced concrete plinth, which means it will stand up to the elements much better.”