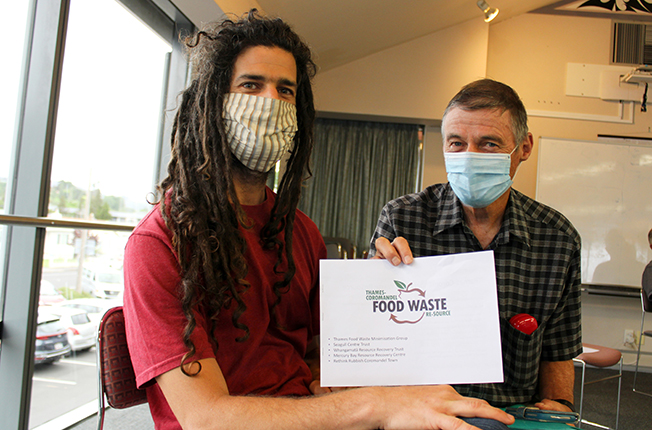 Worm farms and composting systems were two of the schemes put forward to council staff last week as a way to divert the district’s food waste from landfill.
A new food waste group, dubbed Re-Source, presented during the public forum of Thames-Coromandel District Council’s meeting on December 7.
Coordinator Shakēd From asked councillors to consider pushing back awarding its new solid waste contract by a few months, so that a strategy that keeps minimisation in mind can be developed.
According to Shakēd, the district council had adopted a Waste Management and Minimisation Plan in 2017; however, not much was being done to minimise waste heading to landfill, including food and organic waste.
“There is simply no incentive for the private company that has the contract to minimise [waste],” he said.
“We were hoping that this could change when signing a new solid waste contract.”
The current contract with Smart Environmental ends in August, 2023, with council awarding a new solid waste contract in June next year.
“Council has recently started the tendering process without any public consultation or even awareness. The new contract will be signed for ten years,” Shakēd said.
“Separate from the contract process, the council is also initiating a ‘waste strategy study’.
“The council has not yet determined a timeline to conclude the study, and they do not intend to finish the study before signing the new 10-year contract.”
According to the Seagull Centre in Thames, 60.9 per cent of rubbish bags left on the district’s kerbsides were full of food and organic waste.
Shakēd said Re-Source hoped the council would take its proposals for food waste seriously. They have since set up a petition which has gained around 370 signatures.
He said delaying the contract by just a few months could give the council sufficient time to finalise the strategy, and include the results in the contract.
“Once food waste is separated, there are multiple options: compost, worm farms, bio digestion, black soldier flies…” Shakēd said.
“And these could be done outside the district, in one location in the district, or at each transfer station.
“These are simple decisions that can be considered and agreed upon based on financial, community, and environmental criteria.
“We prefer composting or worm farming at each transfer station – but that’s not the most critical part – without separating food waste at the source, and including it in the contract, none of the options are possible.”
DETAILS: For more information, visit: our.actionstation.org.nz and search for Thames-Coromandel.