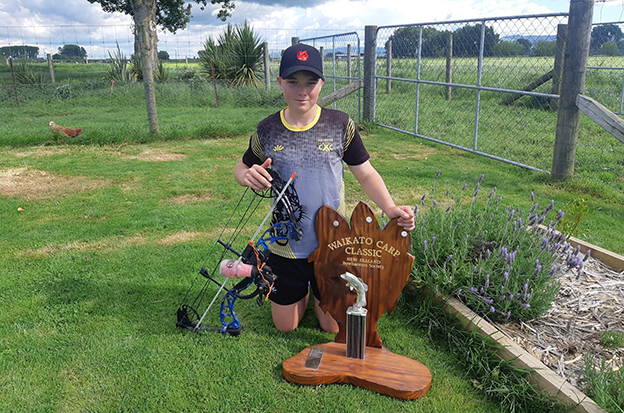 A young bowfisherman has removed around 300 koi carp from Waikato rivers this year, leaving him top of the table in a national competition and the waterways more free from the pest.
Logan Dodunski, 14, won the NZ Bowhunters Society Carp Busters Competition – a year-long event that encourages its members to eradicate the accidentally-introduced species.
The Hauraki Plains College student usually hunts around the Whangamarino river near Mercer, or at the Waihōu and Piako rivers, which flow into the Firth of Thames.
His favourite thing about the sport is the anticipation.
“You never know when you’re going to come across that big fish or your personal best,” he told The Profile.
“Sometimes it’s easy to see [the koi] and other times it’s not, depending on the day and the water colour. It can be murky or there could be cloud cover; sun really helps you to see in the water.”
According to the Department of Conservation (DOC), koi carp contributed to poor water quality and were a serious problem in New Zealand.
When the species fed, they stirred up the bottom of ponds, lakes, and rivers, muddying the water and destroying native plant and fish habitat.
Matthew Brady, a freshwater technical advisor for DOC, earlier told The Profile that koi were an ongoing issue for regional councils – particularly in the Waikato region.
Koi carp were known to be present within the Piako and Waihōu river catchments, with records showing the species had been in those catchments for more than a decade.
Logan’s score of 76 in the Carp Buster’s competition was 12 points higher than the second place-getter, and his best result compared to the 2019-2020 contest.
He said the key to doing well was consistency.
“You’ve got to be shooting constantly throughout the year. The first year, I was sitting around that sixth place position for quite a while, then I made it to the top three, and then for the last month I shot quite well,” he said.
“This year, I’ve been at the top of the list for the whole time.”
Logan, joined by dad Waynne and brother Reuben, could be out along the waterways for anywhere between two and four hours. After catching the koi, they either bury it, fillet it for bait, or use it as burley.
According to The New Zealand Bowhunters Society, members have been hunting koi carp in the waterways that connect to the lower Waikato River system since 1988.
The society has permits to hunt the species in the region.
September through to Christmas have proved to be the best time to find carp, it said, with the warmer summer months seeing koi much more active and therefore easier to find.
DETAILS: The Department of Conservation says people can fish recreationally for koi carp, but the pest fish must be killed as soon as they are caught, and dead fish are to be disposed of by burying them well away from the waterbody where they were found. Report suspected sightings to 0800 DOC HOT.