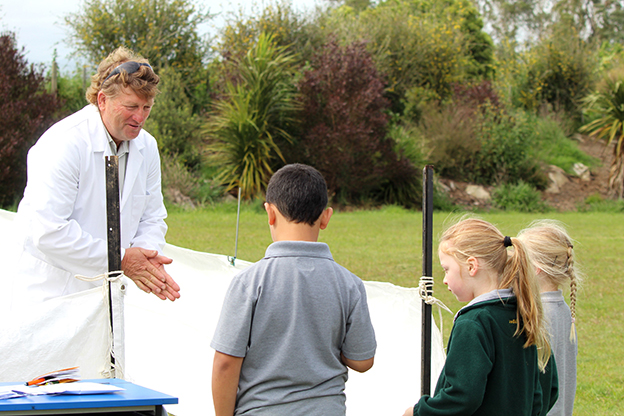 Covid-19 restrictions may have changed the face of calf club days throughout the Thames Valley this year, but one person who remains a constant is praising schools for getting the job done.
The man in the white judge’s jacket, Jeff Alley, said schools throughout the district did well to adapt to the ever-changing Covid-19 restrictions that have plagued the country since August.
The Hikutaia farmer judged calf club days at schools including Hikutaia, Matatoki, and Puriri, as well as the Hauraki Group Day held at Kaihere School earlier this month.
“The schools did a good job of managing things. It would have been a bit of a challenge to manage but they all did very well,” he told The Profile.
Mr Alley started as an associate judge around 30 years ago, when he was 22.
“Back in those days, you just stayed in your district, and when you’d done enough, the other judges would write a report on you, and when they thought you were good enough, you’d go up to be a senior judge,” he said.
“When you’d been a senior judge for a while, you’d get nominated by the convenors of the district – Waihi, Morrinsville, Hauraki, Ohinemuri, and Katikati – and then you’d get to go to a Group Day or A&P Show.”
Mr Alley is now a senior judge for both events, and is also the convenor for the Ohinemuri group.
He participated in calf club days when he was at Hikutaia School, even winning the championship in leading for the last two years he was at school, and said the events were good for kids to take part in. However, more judges were needed to keep the rural tradition alive.
“I think we’ve lost a lot of people because there are a lot more people who work during the week. Everyone’s got more demands of them, I suppose,” he said.
“[Covid] has also put a big halt on it. The shows are limited this year, and most Group Days have been pulled out. [At Hauraki’s Group Day], they split the day in half to try and break it up so they could keep under that 100 people rule. They had calves and goats in the morning and lambs in the afternoon.”
Mr Alley said typically around 200-300 people could be at the Hauraki Group Day; however Covid-19 restrictions meant only 100 people could be on site at any one time.
Hauraki Group Day head organiser Michelle Lange, from Kaihere School, was determined to see Group Day happen for the students and the 68 animals, and set about making sure all new Covid-19 guidelines were followed.
“The students generally start bonding with their animals in July, and to get to October and say no to them was not an option I wanted to take,” she told The Profile.
“While each school takes a turn organising and hosting each year, I was very fortunate to have the backing and support from parents from other schools to help make sure the day could happen.”
Michelle said while the day was much quieter with no spectators and only one adult per child, it was “fantastic” to see the students in the rings with the judges.
“Calf club and Group Day could not happen without the judges and we are really appreciative of the efforts they made on their side to ensure we could run the event.
“It can be scary walking into the ring as a small five-year-old, but the judges made them feel comfortable and supported them to do their best.” By KELLEY TANTAU