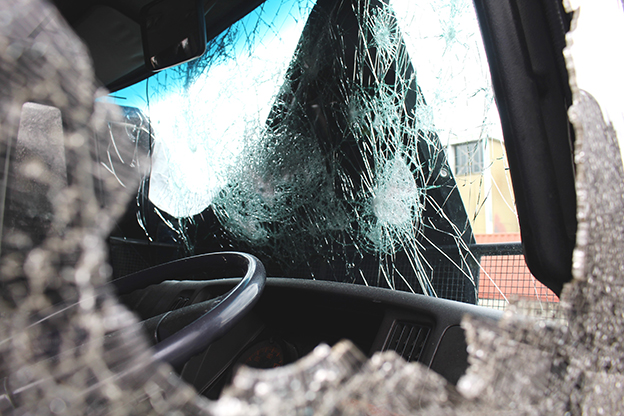 One of the windows of Dee Olsen’s vandalised buses cracks a little deeper.
“Listen to that,” she says. “That’s my heart breaking.”
She’s standing at the Paeroa yard where three of her buses were vandalised by youths over the weekend. The three buses that were used to carry students to and from school across the district. “I came down here expecting a broken windscreen, not every single thing smashed,” she told The Profile on Monday morning.
One bus, that had just been purchased three weeks ago, now sits with a spider web-like smash in the centre of it. The second has not one salvageable window on its right side. The third – and it’s the damage which hurts Dee the most – is shielded in tarpaulins, as broken glass lies scattered in the driver’s seat.
Dee has owned Paeroa Private Hire since August, 2011. Her story is one of overcoming adversity, slowly building up her fleet which started with a seven-seater van.
But it’s the little white bus, the one that is used to cart around kindergarten children, the one with the most wanton damage, that Dee is most desperate to save. She calls the bus Reece, after her late son, who died in a car crash in Netherton in 2017.
“Reece would drive this one when he could, and I wanted to hold on to it,” she says between tears. “When he was killed, his fiance was four-months pregnant with their baby, and some of the only videos I have are of him in the bus, driving us back from Whangarei.”
Reece’s child will be four come December, and Dee had decided a long time ago that she was “never going to lose” that bus.
But the bus has been the victim of wilful damage undertaken by youths, who were dropped home by police following the incident on Saturday, and repairing it could be a long road.
“I love my buses, and I do love my little town… but this morning I hit rock bottom. This morning, I’m feeling it,” Dee says.
Despite this, and despite the fact she hasn’t received an apology from those involved, Dee doesn’t condone any ill-will being sent the youth’s way.
“I want them to be okay,” she says. “They don’t need a [negative] consequence, they need something that’s going to be productive, like getting them to do a garden, where they are responsible for it, and maintain it. Then they can eat the fruit, the veggies. Then they can see the consequences of being positive.”
A police spokesperson confirmed police attended a report of wilful damage on Francis St, Paeroa, at around 5.30pm on Saturday. “We attended and spoke to the youths involved and dropped them home.” Enquiries into the incident are ongoing.
A Givealittle page has been established to raise money to go towards the insurance excess of fixing the buses. Since being created on Saturday, it has so far raised more than $7600.
To donate, find Paeroa Private Hire at www.givealittle.co.nz.