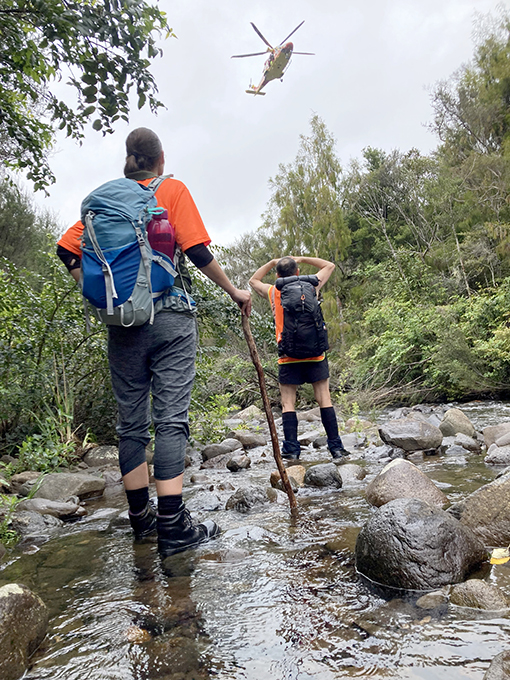 Carrying a Satellite Emergency Notification Device (SEND) has paid off for one young solo tramper who found herself in need of lifesaving help after becoming too ill to complete a hike in the dense Coromandel bush.
The 23-year-old Hauraki Plains local had set off on an overnight tramp in the Kauaeranga Valley area, near Thames on October 23.
She walked to Crosbies Hut in the Coromandel Forest Park, where she stayed Saturday night before beginning her descent on Sunday back to Kauaeranga Valley Rd where she was to be picked up by a family member.
But on the return trip, the woman fell ill and became lost, falling downhill and ending up about 20 metres from the track in a stream.
Waikato Police Search and Rescue Constable Brad York said the woman was wet and cold but was able to make it back on to the track to send an SOS message on her SEND device.
Around 2.50pm on Sunday, the Rescue Coordination Centre received advice from the International Emergency Rescue Coordination Centre in Texas that an SOS message had been received. The centre contacted a family member who confirmed the woman’s tramping plans and GPS location was obtained with the message.
“Beacons are an effective way of letting people know that you need urgent help and where to find you,” Rescue Coordination Centre New Zealand (RCCNZ) senior Search and Rescue officer Keith Allen said.
“It made all the difference in this rescue.”
RCCNZ then notified the Auckland-based Westpac Rescue helicopter. At the same time, Waikato Police Search and Rescue teams were notified. A search and rescue base was set up at Thames Police station and Thames LandSAR volunteers were called out. A total of 13 volunteers, including two field teams and management members, turned out for the search.
Brad said the first field team was dispatched to search the track to the GPS location of the beacon. With poor weather clearing in the area, the Auckland Westpac Rescue helicopter was able complete a first aerial search area but was not able to locate her due to the dense bush, so returned to Thames to refuel.
Updated GPS coordinates were provided by RCCNZ, Brad said, and as just as the Westpac helicopter arrived at the updated location, search teams on the ground located the missing woman.
She was found about two thirds down the track, wet and cold, and still feeling ill, but in a stable condition. A paramedic was winched from the helicopter into the bush to retrieve the woman, who was then flown to Thames Hospital for further assessment.
“It was less than four hours between her activating the emergency device and being located,” Brad said.
“It’s a great example of a tramper being well prepared, leaving detailed trip intentions with family, and carrying the right equipment for New Zealand’s outdoors.”
The woman also made the right decisions when things went wrong, he said.
She realised she was in trouble and sought help by activating the beacon while managing to move into a position where she could be seen from the air.