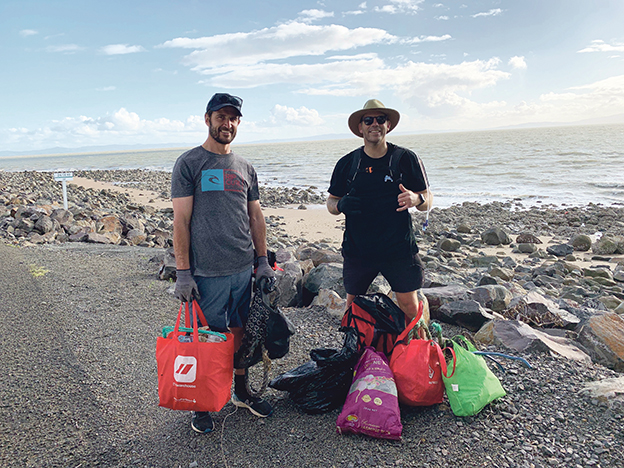 Drug paraphernalia, empty alcohol bottles and cans, and around 40kg of discarded fishing gear, mussel buoy ropes and general rubbish are among the items a former Thames man recently found on a clean up endeavour in the region. WINTEC journalism student KATE DURIE finds out more.

A former Thames High teacher’s social media call to clean up New Zealand beaches has resulted in hundreds of kilograms of rubbish being collected nationwide.
Luke Macfarlane, who grew up in Thames and now lives in Papamoa, launched the national clean-up operation with his friend Dan Goodwin through their initiative called Fulfilled NZ.
The online movement focuses on creating a national community initiative to clean up beaches, harbours, and local environments.
For the past nine weeks, supporters have been able to show their efforts on a map on their Facebook page, Fulfilled NZ.
So far, they have reported cleaning up to 400 kilometres of coastline, rivers, harbours, bush and other areas, removing 550kgs of litter.
Luke, an avid fisherman and surfer, was visiting family at Waiomu recently when he spotted a lot of fishing material washed ashore.
Luke said there was “quite a bit of fishing material from the mussel farms and from commercial fishing boats”.
That spurred him to organise a group to clear rubbish along 9km of coastline from Kuranui Bay, just out of Thames, to Waiomu.
By the time they reached Ngarimu Bay, they had collected 40kg of fishing material and litter.
Earlier, Luke had cleaned up part of the Kauaeranga Valley with help from friend and artist Krissy Walton, who teaches and creates ceramics from The Clay Shed.
Together with family and friends, they bagged 20kg of waste over a 4km stretch of the Kauaeranga Valley, including empty alcohol cans and drug paraphernalia, he said.
He was then tasked with some early learning conversations with his young children, nieces, and nephews to explain what some of the items they found were.
Finding evidence of drug use was “disappointing to see”, he said.
The clean up was a good start, he said.
“It was a good effort, but there is so much more to do,” he said, “it barely scratched the surface – a lot of rubbish is caught in the rocks and we didn’t have a sharp enough knife that day”.
Fulfilled NZ is currently developing a web-based platform and app to encourage a nationwide community initiative for people to pick up any rubbish they come across while outdoors.
The app will also allow people to record their efforts and share their experiences through photos and comments.
Eventually, the app will include leader boards and prize packs for different districts and communities.
DETAILS: For more information about the clean-up initiative, go to @fulfillednz on Instagram or find Fulfilled NZ on Facebook.