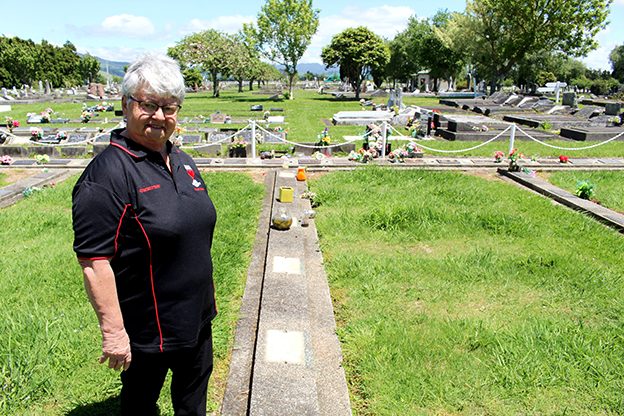 Scrap metal dealers across the country have been asked to keep an eye out for anybody bringing in bronze plaques, after more than a dozen were stolen from service people’s graves recently.
Chris Fraser, owner of Bronze Plaques NZ in Thames, told The Profile the plates marking the graves of returned service people had been stolen from the Waihī Cemetery on two occasions last month.
Eight plaques were stolen on October 7, and a further eight on October 19.
The thefts have been reported to police, while scrap metal dealers nationwide have also been alerted, he said.
One of the dealers told of the theft was Vern Harding, at Scrappy Vern’s in Paeroa. He’s been in the trade for 18 years and has seen some unusual items come through his doors.
“When I first started, the police rang me up, because there was a bronze statue in the main street of Waihī, and someone had cut the arm off,” he told The Profile.
“So they wanted to know if I had an arm come in.”
At one stage, he also saw an influx of hot water cylinders, as well as copper power lines and pipes, but being in the business so long has helped him develop a sharp eye.
“Stolen scrap metal sticks out so obviously,” he said.
“Someone will have too much of something. A plumber rang up one day because he had brass joiners and things that got stolen. He asked me to keep an eye out. An hour later, two young boys came in with them.”
Only once before has he heard of bronze plaques getting stolen – from the RSA Cemetery in Paeroa. And while scrap bronze fetches more than brass, he doesn’t think the thieves would rake in much money for them – maybe $30 a plaque.
Bronze Plaques owner Chris Fraser said that’s “pittance” compared to what the plaques retailed for – around $1000 a piece.
His company is the only place in the country where one can recycle a service person’s plaque – and those who try to do it illegally are often caught.
“The last one was a couple of years ago down in Christchurch and that person was charged. The plaques were found because they tried to sell them and that’s how they got caught.”
Mr Fraser said defiling a service person’s grave was one of the lowest things a person could do, and hoped that following Armistice Day – held on November 11 to commemorate the sacrifice of those who died serving New Zealand – someone would come forward and return them.

“In the past, the majority of plaques have been found, but at this stage, nothing has come through. Hopefully somebody knows something,” he said.
There was another theory that the stolen plaques could get melted down – a speculation told to Waihī RSA president Ellen Henderson.
She said the plaques had been in the cemetery for around 50 years, and those who had stolen them were “very cheeky” and had no pride.
“To think what these service people had done in their lives… they served the country to make it what it is today,” she said.
“It’s upsetting, and it upsets your veterans, because they risked their lives to fight for the country, and then scallywags want to do this sort of thing.”
The names of the service people have been identified and plaque reinstatement is underway.
Police told The Profile it received a report on October 22 that plaques had been stolen from headstones at the Waihī Cemetery.
“Staff are actively investigating this incident to determine the circumstances and identify those involved.” By KELLEY TANTAU