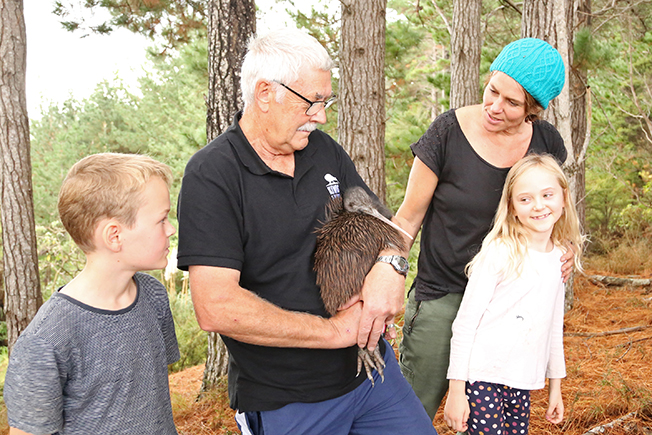 Kiwi handler Neil John shows off a brown kiwi to students in the bush of Te Mata. PHOTO: RACHEL HOLMES

Neil John’s hand goes down into a burrow built by kiwi in the Thames Coast bush, and when it comes back out, it’s holding a cracking egg with tufts of brown feathers poking out either side.
In an extraordinary circumstance, he watches as a baby kiwi is born before his eyes.
The moment has become one of Neil’s highlights of his two-year career as a kiwi handler, and a moment he says he’ll “never forget”.
Neil monitors and looks after the kiwi that live in Te Mata, as part of his work with Thames Coast Kiwi Care (TCKC).
The society became involved in Operation Nest Egg in 2014, with Neil becoming a certified handler two years ago after the Covid-19 pandemic made it difficult for Auckland Zoo staff to travel to the Thames Coast.
Neil locates the male kiwi sires and collects their eggs at around 65 days of incubation. He then transports them to Auckland Zoo for hatching.
The chicks are soon moved to a predator-free island to grow up big enough – 1.2kg – to fight off predators before being returned to their home in the wild at Te Mata.
“If we don’t take [the eggs], there’s a good chance those birds won’t actually get to adulthood. They’ll be killed before they get to the 1.2kg weight,” he told The Profile.
“And what people probably don’t know is that the chicks will only stay with the father for about a week anyway, and then they have to fend for themselves.”
In the TCKC catchment area, there are transmitters on five kiwi, and Neil has got to know them well.
“They all have their own personalities,” he said. “I’ve got to know all the ones we’ve got monitors on, so I know how they’re going to react when I do a health check and so forth.
“Some are quite calm, others are pretty grumpy, but quite often, most of them go back to sleep.”
As well as witnessing the hatching of the kiwi chick, Neil has had many memorable moments out in the bush, like when a kiwi dropped its transmitter earlier this year.
“When a kiwi drops a transmitter and there’s no movement, it gives off a mortality signal, so I thought I was going in to pick up a dead kiwi,” he said.
“I found the transmitter, and as I was coming back, I remembered I’d picked the eggs up from this sire not too far away from here last year. I wondered if he was in the same burrow.
“I put my hand in and had a look and, yup, he was definitely in there.”
Neil collected the eggs but because Auckland was locked down, and the Wairakei facility was closed, he had to keep them in the hot water cupboard at his home overnight. “I had to get up during the night and reheat the hot water bottle to keep them warm,” he said. “We’ve had little special moments like that.”
On the flip side, however, Neil has also had to endure the worst type of kiwi recovery: locating a deceased bird.
“I get to know these birds quite well, so it does affect you, it does cut you up quite a bit.
“They are very, very special to me, so it does upset me when people say: ‘My dog will never hurt a kiwi’. They don’t understand what it’s like,” he said.
“Once a dog grabs a kiwi, the damage is done.”
And with the birds moving closer and closer into the backyards of Te Mata residents, it was as important as ever for home and dog owners to know how to keep them protected.
DETAILS: TCKC run kiwi avoidance training. For dates and further information, visit: www.thamescoastkiwicare.org.