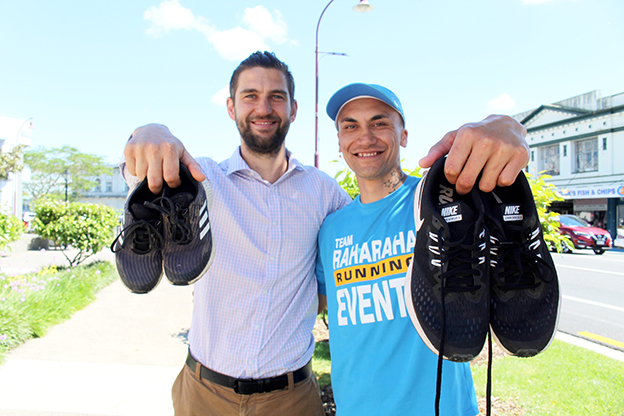 Matt Bowie, left, and Paora Raharaha have teamed up for a fundraising run for kids. Photo: KELLEY TANTAU

When Paora Raharaha got out of prison in 2016, all he had was a pair of running shoes from The Warehouse.
“I just ran, and I found myself wanting to go out every day. I used it to help me with my frustration, my anger issues, and the negative thoughts in my head.”
He competed in his first running event that same year, and saw his dad waiting for him at the finish line.
“That was the first time he saw me achieve something – and I wasn’t going to do another one, but my dad was proud, so I started doing it [for] him too,” he told The Profile.
Since then, Mr Raharaha has participated in various running events, at times helping to raise thousands of dollars for charities with fellow local runners Caleb Koia-Hamling and Jack Keeys.
He is now teaming up with Harcourts realtor and Karangahake local Matt Bowie for a project they’re both passionate about – getting young people into the right footwear so they can get on the path to mental and physical wellbeing.
“There’s a few kids that struggle to get into running just because they can’t afford footwear, primarily,” Mr Bowie said.
“They just do with what they have,” Mr Raharaha added, “and to be honest, it’s pretty much nothing… but I know that with the right gear you can do a lot better.”
When running shoes don’t fit right, you can feel it through your whole body, he said.
“I’ve run in things I’m not supposed to run in, and it just affects your whole body.”
Back in February, Mr Raharaha, from Paeroa, ran the Tarawera Ultra Marathon in gumboots, finishing the race within 20 minutes of its cut-off time of 36 hours.
He also completed more than 1600 burpees along the way. Now, he and Mr Bowie have a goal to get as many young people as possible into physical activity.
“If they’ve got the right gear and they’re able to get into running, it’s keeping them off the streets and helping them work towards something,” Mr Bowie said.
“They may not necessarily be that keen on school, but a lot of them are extremely able physically, so it’ll be great to use that energy for positive things.”
The pair are calling for donations of quality children’s second-hand running shoes, athletic wear and sporting equipment. This can be dropped off to Harcourts Thames or Paeroa, or at the Hauraki Repair and Reuse Centre on Grey Street, Paeroa.
Harcourts will then pay for the items, with the gear being made available to any children in need for free. The pair have also set up a Givealittle page.
“I think [exercise] is not just important for your physical wellbeing but your mental wellbeing,” Mr Bowie said.
“I think if [the kids] are guided in the right way, they can become very, very successful,” Mr Raharaha added.
The pair are also putting the feelers out for anyone interested in helping to run, or set up, a youth running group in Paeroa.
DETAILS: To get in touch, contact Matt Bowie at Harcourts Paeroa, or, to donate, visit: givealittle.co.nz/cause/kids-cant-afford-to-play-sport.