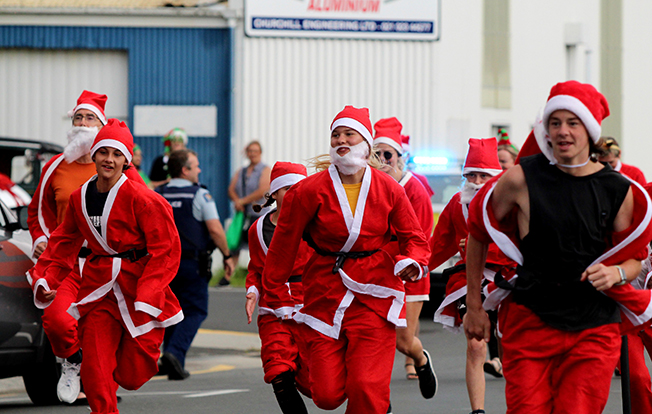 The Thames Santa Dash fundraiser will not go ahead this year, along with Thames and Paeroa Santa parades. File Photo: KELLEY TANTAU

The Thames Business Association is “heartbroken” after having to cancel its annual Santa parade due to Covid-19 uncertainty.
It follows in the footsteps of Paeroa’s parade, which has also been called off while the country continues to work to a 90 per cent vaccination target set by the government, while Ngatea hopes to press on with their parade at this stage.
Thames’ parade was scheduled for December 10, and this year, was to be run in partnership with Thames South School. The parade route was going to be reversed, with festivities ending at the school on Rolleston St.
There were also going to be pre-parade workshops on float design.
“We had big plans… and it breaks my heart actually,” business association chief executive Sue Lewis O’Halloran said.
“The school board can’t take the risk, and I don’t want to do the parade without working with them. We put so much into it.”
Sue said there were still unknowns about the government’s recently-announced ‘traffic light’ system which would eventually replace existing Covid-19 alert levels.
If the district did move into a more flexible way of life on December 1, that still wouldn’t allow enough time for planning or building floats, she said.
“I desperately want to do the parade and I do think we need something to cheer us up, but we cannot be the ones to bring Covid to this community.”
The Santa Dash, a sprint down Pollen St by competitors dressed as Santa Claus, acted as a fundraiser for the business association, and will also not be able to go ahead.
Meanwhile, Positive Paeroa, in a post on social media, said after much discussion, “and with a fair amount of sadness”, it had been decided to cancel the town’s Santa Parade.
“The uncertainty that Covid brings really does make it impossible to proceed this year.
“The organising committee, Positive Paeroa and Paeroa Lions Club, agonized over the decision, but ultimately were left with no other choice,” the post said.
“We know that you’ll be equally as sad but also understanding of the considerations that led to this decision.”
Ngatea’s Christmas on the Plains Committee member Shannon Stratford told The Profile on Monday they would still go ahead with the parade portion of the event if they received a written sign-off from the district council, which they would contact this week.
The Santa Parade was to take place on December 11 at 2pm, with a route through the town centre to Hauraki Plains College’s outdoor stage, where there would be a Christmas in the Park event.
The latter proved a bit more ‘hairy’ to organise as it was on school grounds, she said.
Communication with the college would be ongoing. By KELLEY TANTAU