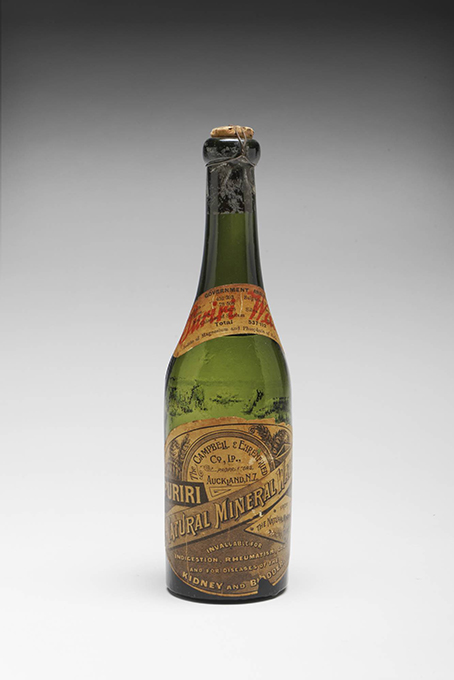 “Oh Tom!” exclaimed Robert Kelly before dropping stone dead with his gun clutched tightly in his hand.
It was around 4pm in early June, 1880, and 45-year-old Robert was out pheasant hunting on the Puriri land where he had lately taken up residence. Robert was one of the successful proprietors of the Puriri Mineral Springs that were on his property, which he had spent the past two years developing with his brother in law, E B Fraser.
The natural springs and their medicinal qualities had been well known to Māori but their isolation meant others were not familiar with them. Access to the springs had been very difficult but when the County authorities laid a road in 1877 it passed within a stone’s throw of them. Taking advantage of this, Kelly and Fraser built extensive bottling, aerating, and packing works. The water when analysed was an alkaline mineral water. It was described as effervescing strongly when escaping from the spring and was clear and sparkling. Newspapers went into raptures when reporting the laboratory results – the water was set “to astonish the world with its wonderful natural qualities”. It could cure kidney disease, gout, rheumatism, stomach acidity and would have great value in pregnancy and sea sickness. “If Puriri mineral water is taken in a methodical manner with regard to diet and exercise, it can be best compared in value to the celebrated mineral waters of Kissengen in Bavaria,” said Dr Payne of Thames. The magical water, which naturally contained a large amount of bicarbonate of soda, was conveyed into the bottling works by a siphon inserted into the centre of the springs and covered with a flannel bag through which it was filtered then bottled.
The Puriri Mineral Springs went from strength to strength and by November, 1878, the first consignment of Puriri Mineral Water reached Thames and was soon in demand at the hotels. By 1879 Kelly and Fraser had an office in Pollen St opposite the Shortland Hotel. Robert Kelly sold most of his property at Puriri but kept about 30 acres surrounding the springs. In mid 1879, they exhibited a case of Puriri mineral water in pints and half pints at the Sydney Exhibition. It was anticipated the medicinal properties would cause a large demand for the water in Australia. In January, 1880, a consignment of Puriri mineral water was sent to Sir Julius Vogel, agent general for New Zealand, to introduce it to London. This was the path to success that Robert Kelly was on when he suddenly died. Robert had left County Down, Ireland, for Australia in 1851, before coming to the Otago goldfield in 1862 and later finding success on the Thames and Coromandel goldfields. In 1875, he built Hikutaia’s Pioneer Hotel. But the young entrepreneur had been suffering from heart disease. Dr Payne had quietly informed his friends that Robert might expire at any moment, but he was in such good health when they went pheasant hunting that they felt no alarm at all.
Robert left a wife, Alice. His funeral at Shortland cemetery was largely attended and out of respect for one of the district’s entrepreneurs, the offices of the Thames Stock Exchange were closed during the afternoon.