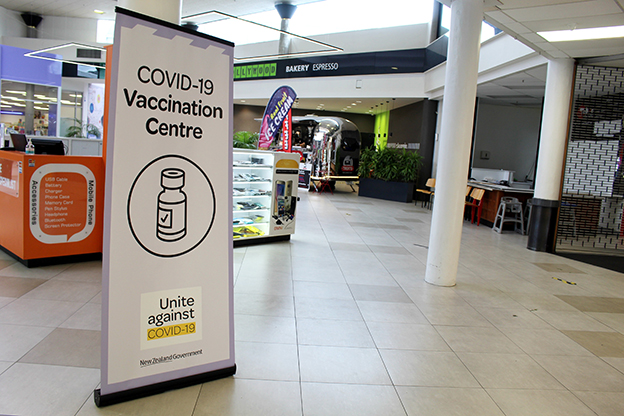 Thames-Coromandel’s mayor has not yet received the Covid-19 vaccine, despite the deadly virus creeping into the Waikato region and low vaccination rates in the Thames Valley. KELLEY TANTAU reports

Thames-Coromandel Mayor Sandra Goudie says she’s “not saying no” to the Covid-19 vaccine despite not yet having the jab.
Mayor Goudie told The Profile she’s waiting for an alternative to the current Pfizer vaccine before getting her Covid-19 jab.
She admits this is a “calculated risk” as the government ditches its elimination strategy and steps up its vaccination programme to counter the increasing spread of the more contagious Delta variant of the virus in the community.
Her vaccination stance comes after she came under fire in August for not scanning the QR codes on the Covid-19 app, later telling The Profile she was “totally on board” with contact tracing, but had admittedly become complacent.
When asked if her delay in getting vaccinated would be contentious among her constituents, she said she was “not saying no to vaccinations”.
“Everybody has to make their own decision,” she said.
Mayor Goudie said she favoured the Novavax vaccine when it came to her coronavirus protection, despite it still awaiting Medsafe approval and having no set date for it being given the green-light.
She said waiting until the Novavax vaccine was approved was a “calculated risk” she was prepared to take.
A Ministry of Health spokesperson told The Profile New Zealand signed an agreement with Novavax for 10.72 million doses (enough for 5.36 million people). Novavax has started its application and has submitted some data to Medsafe for review, with more data expected later this month.
“Following Medsafe’s regulatory decision on the safety and effectiveness of the Novavax Covid-19 vaccine and once delivery schedules have been confirmed, we will consider the use of Novavax in New Zealand.”
Meanwhile, the Z Service Station in Ngatea has been named a location of interest after a Covid-19-positive case stopped there twice while shifting house from Pukekohe to Katikati. They have since tested negative, along with their family, and the Ministry of Health said the public health risk was low given the person was fully vaccinated and had been avidly using the Covid-19 tracer app.
However, those who visited the service station on Friday, October 8, between 6:15am and 7:20am are being advised to test immediately and stay at home until they receive a negative 5-day test. Those who visited on Saturday, October 9, between 10:50am and 12:15pm are advised to self-monitor for Covid-19 symptoms. More information at health.govt.nz.
Latest Ministry of Health vaccination figures show parts of the Thames Valley region have some of the lowest vaccination rates compared to other districts throughout New Zealand.
As at October 8, the Thames-Coromandel

district (eligible population of 26,266) had 23.9 per cent of people without a single dose of the Covid-19 vaccine. Around 76 per cent had one dose, and 53 per cent had two doses.
Across the border in Hauraki, vaccination numbers were looking more bleak.
Out of the 67 districts listed, Hauraki was sitting at number 57, with only 40 per cent of its eligible 17,324 people fully vaccinated. Around 30 per cent were without a single dose.
Mayor Toby Adams said after there was a Covid-positive case out Kaiaua way, people “swooped in” to get tested and vaccinated.
“Is it going to take somebody to have another positive case within our towns to get everyone to go: ‘Right, I should get my act together and get it done’?
“There is always going to be a percentage that will never get it done and that’s their choice, but hopefully they are in that 10 per cent band and we can get to 90 per cent and we can live a normal life going forward.”
Mayor Adams was optimistic more of his constituents would get vaccinated in light of the government’s Covid-19 certificate and ‘Super Saturday’ announcements last week.
He said it looked like the “Covid Gods” had heard the Hauraki population needed more opportunities to get the jab – such as in the evenings and on weekends.
Mayor Adams told The Profile he was double jabbed and had only one side effect following his first vaccination – a sore arm.
“There’s a lot of fear out there that it’s dangerous and all that kind of stuff, but at the end of the day, Auckland has been sitting in lockdown for nearly 50 days now and the best that we can do is get vaccinated and follow suit like other countries have.”
DETAILS: Book your vaccine at: bookmyvaccine.nz or Ph 0800 28 29 26.