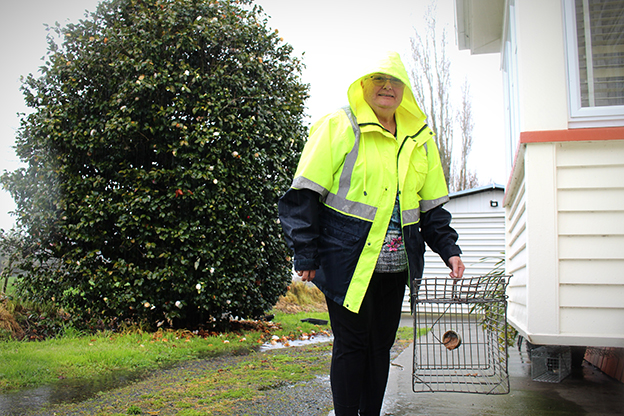 Margaret Newall braves the bad weather to reset one of the cat traps scattered around a Hauraki Plains property where strays reside. Photo: KELLEY TANTAU

A passion for felines sees Turua woman Margaret Newall brave all weather to save cats in need of care and rehoming. KELLEY TANTAU joins her on her latest rescue, where a large number of cats were found.

It was raining when Margaret Newall stepped out of the car to reset humane cat traps scattered around a Hauraki Plains property.
Somewhere, there were still a handful of cats needing to be rescued, and eventually rehomed, but they were sheltering from the spring downpour.
Margaret, from Turua Animal Rescue, was last month notified of the colony of up to 14 cats residing at the Hauraki homestead.
They had been looked after by an eldery lady who had since been moved into care. She had managed to catch around 10 of the felines, but it was expected a few more were still hanging around.
“I’ve been so busy. I go out and check the traps twice a day,” she told The Profile.
The cats were semi-socialised, and Margaret expected them to range in age from around nine months to nine years. But the scale of the colony, whilst impressive, was not surprising.
Margaret started up the rescue after last year’s Covid-19 outbreak. She said there were “cats galore” throughout the Hauraki district, and this latest colony was not the largest she had heard of.
“People don’t often think of the ongoing costs of having an animal. You’ve got to think, a cat lasts up to 18-20 years. There’s the annual check-ups, the annual boosters, the annual vet checks, but people do not take that into consideration sometimes,” Margaret said.
“So I get a lot of cats that have been dumped down Orongo Rd, or dumped in a hay barn, or in a shed.”
But it was not long before the cats – through Margaret – found another loving home. She onced picked up a “gorgeous” ginger cat that needed rehoming, and within 48 hours, it was sent to Tauranga to be with its new family.
And, after going back day after day to secure all the stray cats from the Hauraki homestead, two of the felines gave birth in Margaret’s care.
There were now 19 cats rescued from the one property, including the five new-

born kittens. Before being rehomed, they will get vet checked, desexed, microchipped, de-flead, wormed, and tamed.
“You’ve got to go in with a towel and get ready to wrap them, because that’s the only way you can pick them up,” Margaret said.
“Then, you just cuddle them like a baby, and just reassure them and say to them everything is okay and that they are in a safe place now.”
Margaret said she tried not to take feral cats on, but “firmly believed” most cats had the ability to be tamed.
“But only if people put the time in.”
The cats reside in converted aviaries that have been equipped with shelving, blankets, food, and water, and even an isolation area.
For the strays, it’s like “seventh heaven,” Margaret said.
Before establishing the rescue, Margaret was working full-time, but within a five week period, she was on the operating table.
“My life changed 10 years ago when my right foot was taken off at the ankle. There was so much that I couldn’t do that I used to.
“Breast cancer changed it again,” she said.
When she returned home after radiation, she needed something to do “to stop me from going crazy”.
After her stepdaughter’s ex-partner asked if she could take on a mama cat and three kittens, the rescue was born, and progress was now underway to make it a charitable trust.
“Donations are the biggest thing that keep me going. If it wasn’t for the donations, I wouldn’t be able to do this.”
More info: Turua Animal Rescue Facebook page.