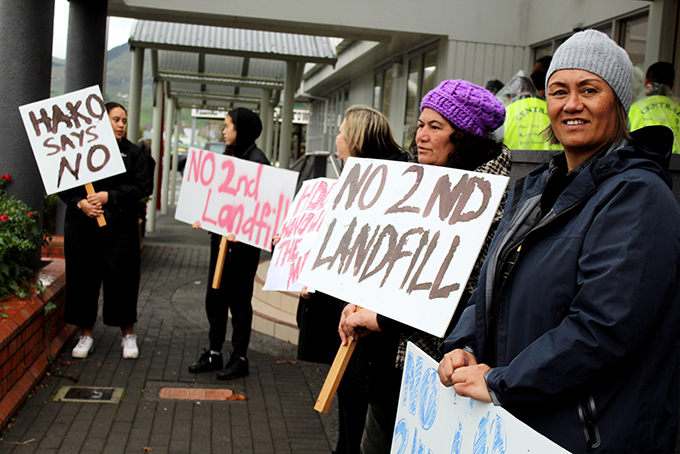 Independent commissioners have declined an application for a second landfill on the outskirts of Hauraki, a move an Iwi leader said was “culturally significant”.
Two decades ago, Iwi Ngāti Hako fought to stop the current Tirohia landfill from being created on their tupuna maunga (mountain) Rae o Te Papa.
Twenty-one years later, when Waste Management applied for a resource consent to allow construction and operation of a second landfill at the site, with a capacity of three million cubic metres, the Iwi said it went against a memorandum of understanding (MoU) created between them and former landfill owners HG Leach.
It was of their understanding the landfill was not to be extended and once at capacity, it was to be closed.
The Iwi attended a hearing of the matter at Hauraki District Council back in June, telling The Profile at the time that Ngāti Hako was “always going to say no”.
Last week, the commissioners declined Waste Management’s application.
Iwi leader Josie Anderson said the ruling was “culturally significant”, and “environmentally aligned” with the view of most New Zealanders.
“[The] decision [recognises] a movement and widespread opinion that New Zealanders have serious concerns about how council’s are dealing with rubbish and the negative impact landfills have on whenua, and how simple education can provide immediate solutions to household waste minimisation.”
Waste Management general manager customer strategy and sustainability Ingrid Cronin Knight said the company was disappointed in the decision.
“The growing Waikato, Bay of Plenty, and Gisborne regions require a solution to safely and economically manage waste, and extending landfilling operations at Tirohia is the best solution with the least environmental impacts,” she said.
“At the current rate of filling, the existing landfill at Tirohia will be full within the next two years, and resource consent was sought to build new cells at a second site within the boundaries of the land.”
She told The Profile the company acknowledged Ngāti Hako’s concerns, and would continue to engage constructively.
It recognised their important connection with Te Rae-o-te Papa and agreed on the need to protect Papatūānuku, the awa and Ranginui.
The company was now reviewing the commissioners’ decision in detail, she said.
Hauraki District Council Mayor Toby Adams said Waste Management had a 15-day appeal time.
He acknowledged the earlier “confusion” over an omission of a condition in the MoU and said he was happy that the process was now being “followed through.” By KELLEY TANTAU