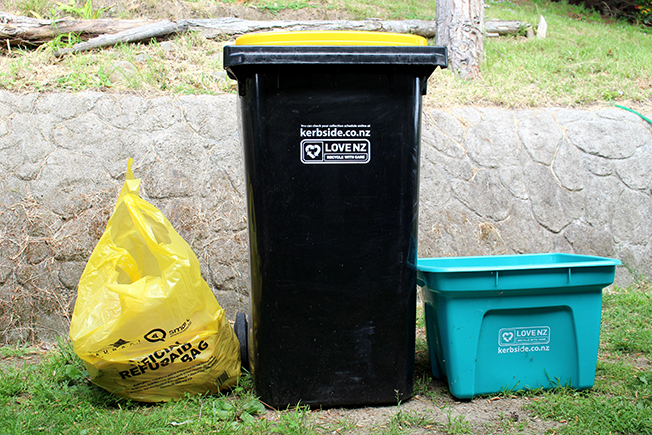 Rubbish bins of different shapes and sizes were rolled into the centre of a district council meeting this month, in an effort to picture what Hauraki’s waste collection could look like come 2023.
To combat the continuous contamination of recycling happening at the kerbside, Hauraki District Council is putting an option out to residents that features four separate crates for recycling: one each for glass, paper, plastic, and tin. These would be accompanied by a landfill wheelie bin and a food waste bin.
It is the council’s preferred option out of four that are now out for public consultation until November 22.
The change comes after the council revoked its existing Waste Management and Minimisation Plan to replace it with a newly developed plan. It also aims to reduce the amount of waste heading to landfill and promote compliance at the kerbside.
“There will be a bit of confusion, but it’ll last about a month, because if your crates are getting left at the kerbside, you’ll pretty quickly work out that it’s not going to be recycled, and when the good behavior gets rewarded by your bins getting emptied, you’ll carry on with that,” Deputy Mayor Paul Milner said.
“I think people know they’re doing the wrong thing, but they don’t care because there’s no consequences.”
According to a council report, from June, 2020, to June, 2021, the district’s waste rose by 50 per cent, significantly higher than population growth in the same period.
Most waste collected was taken to Tirohia Landfill; however, council said this site may not be an option in the future due to its dwindling capacity.
An audit of kerbside waste also showed up to 11 per cent of content in kerbside bags could be recycled, while 63 per cent was organic (either green waste or food waste), which could be composted.
Cr Milner believed getting rid of the yellow kerbside bags was the “way to go” to ensure people were putting waste in the right place, while Mayor Toby Adams said once a bin had a lid that closed, people’s “laziness” became apparent.
That was why, with whatever option chosen, council needed to put “some decent money” into a “proper campaign”.
“If we try and do it on a shoestring, we’ll get nothing, because change freaks people out, it doesn’t matter what it is,” he said.
“You’ve got to get the education out there, the reason behind it, the benefits that it has, and actually spend some money on it to make a difference.” By KELLEY TANTAU