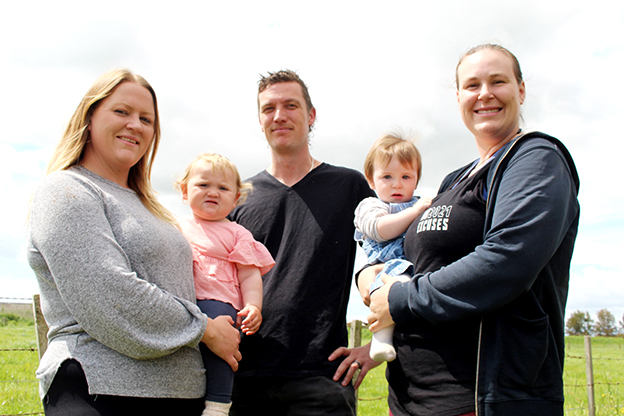 A community Facebook group has been the catalyst for two Hauraki mums to lose the baby weight and get motivated.
Christina Lynch and Aimee Chipperfield lost a combined 37kg after taking part in a 12-week weight loss challenge posted on their local Facebook page.
Christina’s husband Cameron also took part, and he dropped 18kg.
There’s now an eight-week “summer shred” challenge, and the trio are encouraging anyone wanting to get their blood pumping to give it a go.
The initiative started back in May, when Ngatea resident Adam Matete challenged his local Facebook community to lose weight across a 12-week period.
The post got an overwhelmingly positive response, with businesses getting on board to donate spot prizes, as well as a grand prize of $500 donated by Paton Kitchens.
There was a weigh-in at the start of the challenge, and then again at four week increments, with the winner of the four and eight week weigh-ins winning gym memberships from Hauraki Fitness Centre.
“It was impressive, and a bunch of us felt that way,” Christina told The Profile. “I’ve lost weight in the past, I’ve been to gyms, I’ve had a personal trainer… this is the most weight I’ve ever lost in one go, and honestly, the difference for me was the community.”
Christina and Cameron have a daughter, Ava, 1, while Aimee has a son called Hugo, who has just turned 11 months.
The women wanted to lose some baby weight and said having each other to motivate them throughout the challenge made all the difference.
“We had only known each other a couple of weeks, but we became really close through this challenge… and [Cameron] said he should probably do it too after all the sympathy eating during my pregnancy,” Christina said.
They also credited friendly rivalries for keeping them motivated during the August Covid-19 lockdown.
“I set up a couple of distance challenges during lockdown,” Aimee said. “The first was doing anything: biking, swimming, running, and the second one was a walking challenge. I won the first one and Christina won the second one, and we rivalled; we pushed each other.”
Members of the group also climbed the notorious Jacob’s Ladder staircase in Thames, among other activities, while Cameron cut out sugar from his diet, something he said he was most proud of.
Christina is now running a second challenge, an eight-week “summer shred” that began on October 13 and will continue until early December.
Around 28 participants are taking part, and Christina invited anyone interested to join the ‘Ngatea 12 Week Challenge’ group on Facebook. By KELLEY TANTAU