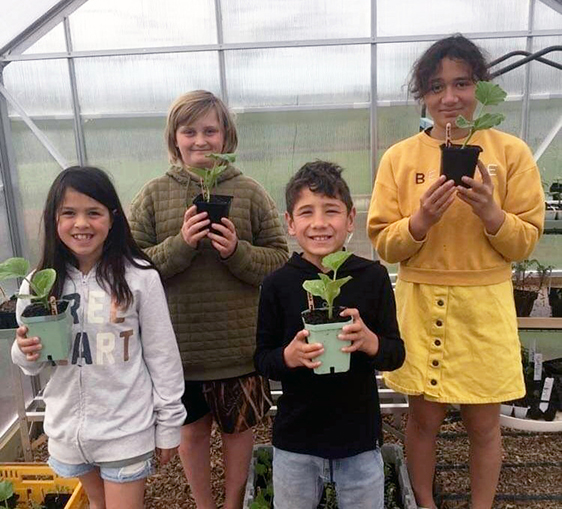 This spring, there will be seeds, and come autumn, there will be giant pumpkins.
October is the month to start getting the garden ready for a gargantuan guest as Turua School prepares to sell its pumpkin seedlings.
The seeds are sown by the students in a greenhouse which was partly funded by the school’s first foray into giant pumpkin growing earlier this year.
They are then sold to families and community members eager for a friendly taste of orange competition.
“It’s a five month process for people,” Turua School garden co-ordinator Anikha Sanders said.
“From the end of October, we’ll have plants for sale for people to grow at home, and previously, we’ve held our giant pumpkin weigh-in around mid-March.
“We had 38 giant pumpkins last time, and more than 400 people came to the weigh-in on the day, and we’ve got a lot more interest this year.”
Anikha, an avid gardener herself, said the main purpose of the pumpkin growing and subsequent carnival was to get children and whānau outside in the soil, and trying new fruit and veggies.
This year, they are hoping to attract participants from outside of Turua as well, and have considered the various Covid-19 alert level restrictions.
“It’s been a bit uncertain as to whether we’d look at doing this because people put in a lot of commitment to grow a pumpkin for five months,” she said, “but even if we do end up in a high-level lockdown in March, we can hopefully come to some sort of weigh-in at least.
“We’re just trying to be optimistic because it’s all about the process and getting families who wouldn’t necessarily garden growing something at home.”
The school is also hopeful they’ll be able to have a good turn-out at its calf club day on October 26, where the pumpkin plants are usually sold.
And while Anikha has had to deal with mice sneaking away with some of her seeds, there were plenty of plants to go around, she said.
“At the moment, I’ve got about 60, but we will have up to 100 plants available, and if there is interest it’s not too late for us to re-sow.
“It’s a nice, long growing season so no one will be behind.”
DETAILS: To register your interest in growing a giant pumpkin, contact Anikha, Ph: 027 823 8839.