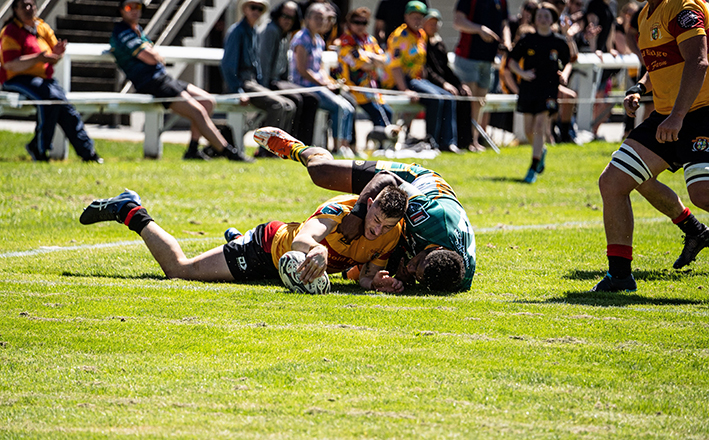 Thames Valley defeated Mid Canterbury 52-35 in an action packed Bunnings Warehouse Heartland Championship match played at Te Aroha last Saturday.
The Swamp Foxes put in a mighty effort against the team from Ashburton which is well known for having size, strength and speed. This game was a step up for the Valley and they were able to create more opportunities for their dangerous three- quarter line of Joe Cooke, Harry Lafituanai and Tevita Halafihi who scored four tries between them.
Todd Doolin opened the scoring with two penalty goals before Mid Canterbury took the lead with a converted try to Tait Chisman, making the score 7-6. The next 15 minutes were a real purple patch for the Swamp Foxes. Doolin, Cooke, Axtens and Halafihi scored tries – three of which were converted by Doolin. With these 26 points Thames Valley were all of a sudden leading by 32 to 7.
A lesser side may have crumbled at this stage of the game but not the Mid Canterbury Hammers. By half time, they had used their big forwards to hammer the Thames Valley line and come away with two converted tries and also see a Valley player sent to the sin bin. At half time the score was 32-21 and the “Hammers” were back in the game. Mid way through the second half Doolin kicked another penalty goal but Mid Canterbury immediately replied with a converted try to close the gap to 35-28. This spurred the Foxes back into action enabling Joe Cooke to score his second try. It was not converted but Valley were now in a more comfortable position with the score sitting at 40-28.
With five minutes to go Cameron Dromgool scored a fine try which Telly Hemopo converted. Mid Canterbury broke through from the kick off and scored another try. Tom Reekie kicked his fifth conversion of the match but Valley had the last say when Harry Lafituanai scored a well deserved try right on full time. There was no conversion -final score, Thames Valley 52 Mid Canterbury 35.
All twenty- two Thames Valley players used in this match deserve the highest praise for thei defence. Their determination and commitment in this facet of the game was outstanding and they nullified numerous Mid Canterbury attacks. All of the Valley tries were the result of clever counterattacks and/or patience in building phases before putting a player in the clear.
Joe Cooke was named man of the match. Thames Valley remain second on the Points Table, one place behind South Canterbury and four ahead of Whanganui who have moved into third place.
Thames Valley: Tries to Cooke, 2, Axtens, Halafihi, Dromgool, Lafituanai and Doolin. Doolin: three penalties and three conversions. Hemopo: one conversion. Mid Canterbury: Tries Koroitamana, 2, Chisman, Burrell and Nasiga. Reekie, five conversions.
Next week, Thames Valley travel to Levin to play fourth placed Horowhenua-Kapiti.