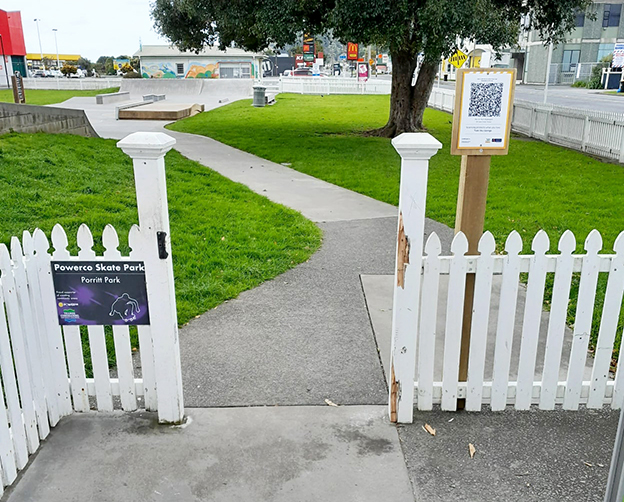 A safety gate was stolen from a Thames park. Photo: SUPPLIED

In the space of one week, a district council was called to clean up illegal dumping three times and replace a playground gate after it was stolen by vandals, sparking safety concerns.
A Thames-Coromandel District Council spokesperson said the playground gate theft was “concerning”, while the illegal dumpers could face prosecution.
On September 22, council staff reported that the safety gate at the entrance to Porritt Park Skatepark in Thames had been removed overnight by vandals.
It had since been recovered and put back in place, but was boarded up “for now”, so council was asking park users to enter and leave through one of the other gates.
“The theft of any item is concerning, but in this case whoever stole the gate put the safety of smaller children using the park at risk, with the busy state highway close by,” the spokesperson said.
“The gates at Porritt Park have taken a lot of use and abuse in the last five years and they’re at the end of their life so we’ve got some replacements on order.
“The design will be in keeping with the picket fence, but a bit different to the current gates to make them harder for children to swing on and harder to steal.”
This incident would be reported to police and camera footage will be reviewed to help identify who was responsible, council said.
Meanwhile, the rubbish dumped in Tararu ranged from a discarded washing machine, an old cabinet, and non-compostable green-waste.
It costs council around $62,000 to pick up and dispose of dumped rubbish such as this, including the loss of revenue had it been disposed of correctly.
“In general, we do aim to prosecute and so we try to gather evidence at the site, with a view to recovering the costs of clean up,” the spokesperson said.
“We also ask that people report any illegal dumping they see and try to provide information to identify the offender, but without putting themselves at risk.”
Much of the illegal dumping throughout the Thames-Coromandel district was at the gates of its Refuse Transfer Stations that had after-hours drop-off facilities, the spokesperson said.
“Items like furniture, whiteware, green waste and other things are sometimes left after-hours at the gates of the Matarangi, Tairua, Pāuanui and Whangamatā transfer stations. Very little dumping occurs at the other transfer stations.”
If one of council’s bylaws officers had clear evidence of dumping, a person could be fined $100 for depositing or leaving litter in a public place, or in a private place without consent; or $400 for depositing or leaving dangerous litter in a public place, or in a private place without consent.
“We can also prosecute under the Litter Act for more serious offences, where the maximum penalty if convicted is $30,000,” they said.
In general, council asks that anyone noticing any damage to any council property to call 07 868 0200 or email customer.services@tcdc.govt.nz to report it. By KELLEY TANTAU