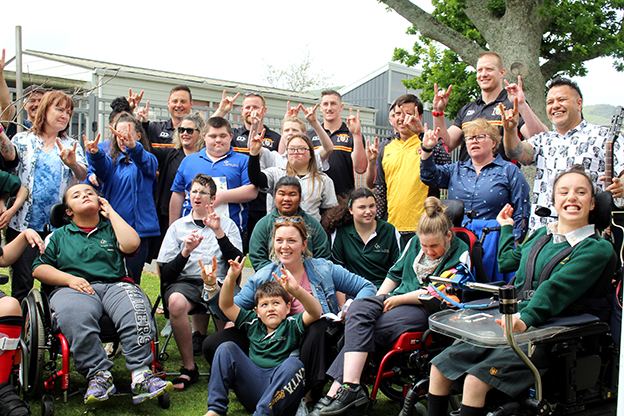 There was a Swampfox sighting down at Goldfields School last Thursday, when members of the Thames Valley rugby team took time to shake hands and sing waiata with students ahead of their annual charity match.
Goldfields Special School in Paeroa is the official charity of the Swampfoxes.
For the past two seasons, the students have helped design a charity jersey, worn by the players and later sold at a post-match auction.
In 2019, the team raised $19,500 after winning their Heartland match against South Canterbury.
The year before, they raised $19,340, after wearing the jerseys in their match against Horowhenua-Kapiti.
This year they’ll come up against King Country at a game in Te Aroha on October 30.
Winger Joe Cooke and flanker Matt McCahon said the Swampfoxes had a special connection with Goldfields, and said the support of the students translated on to the field.
“When we get out there this weekend, we’ll have them behind us, which will be awesome,” Matt told The Profile.
Joe, who had visited the school on Norwood Rd previously, said he and the team were taken on a tour to see what the school had available to them – but also what was lacking.
“So that’s sort of where we come in. We can support them with a bit of koha, as well as just have a bit of fun with the kids.
“The team represents a big area, so for us to be able to come together as a group is awesome and it gives back directly to them.”
The players understood this year’s charity jerseys would feature the portraits of the students.
Principal Cam McKenzie said the team’s support had been “amazing”.
“The students really love it when they come in. They’re great role models and we really appreciate their support.”
Cam said they usually allocated the funds raised to “something specific” – and this year, he was hoping to purchase a platform that can raise students in wheelchairs up on to a stage.
In the past, students have had to perform in local events at ground-level, because many stages weren’t accessible, he said.
“And we’ve got a rule that if we can’t all go on stage, none of us do.”
DETAILS: Thames Valley vs King Country, 2pm, at Boyd Park, Te Aroha. More info: thamesvalleyswampfoxes.co.nz.