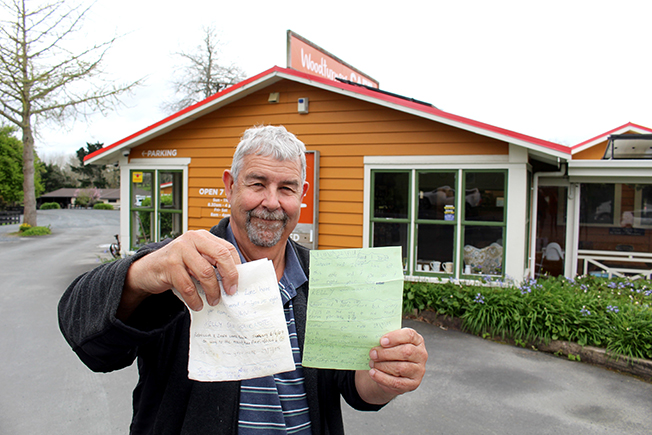 Hand-written notes scrawled on an old serviette and a piece of green paper have been a source of hide-and-seek for one unknown family for more than a decade.
But with no entries hidden at the Hauraki cafe where the notes were found since 2017, the mystery over the authors remains.
Staff at Woodturners Cafe in Mangatarata, just west of Ngatea, used to watch out for the note-makers, and make sure none of the messages were ever cleaned up during the cafe’s many extensions and alterations over the years.
“They’ve moved around as we’ve grown, and yet the [writers] have found them every time,” owner Blair Mattock told The Profile.
The trail of notes started back in 2008 with: “Rebecca and Zane have left this note and if you see [it], right your name [sic].”
The pair returned in January, 2009, writing: ‘Rebecca and Zane came back on [the] way to the Mount, then Parihaka”.
Throughout the next year, the note was signed by Jan, Jude, Heather, Caitlyn, and Bradley.
Zane returned from Tauranga in October, 2012, while Rebecca headed down to Mount Maunganui again in December that same year. The last known entry was written by Elias and Oscar in November, 2017, who were having lunch before heading back to Te Kauwhata.
Mr Mattock said the letter’s clues pointed to the original authors being around eight-years-old and living in the upper or central North Island.
It appeared they visited Tauranga during summer or school holidays.
“Both of my girls worked here while they were going to uni, and they kept an eye on who went to the [hiding place].
“They had a fair idea of who it was, but we haven’t seen them for years,” he said. “I hope everything is okay.”
Mr Mattock said he’d love it if the authors, who would quite likely be adults now, were located. “When you do this for a certain amount of years, you find that you do get a lot of repeat customers and you get to know them, and you notice when they stop coming in.
“It seems sad that it’s now been four years since the last entry, and so it’d be great if anyone does know Elias, Oscar, Zane, or Rebecca.”
And although the cafe – which was identified as a location of interest following a visit by a Covid-positive man in August – remained closed until lockdown restrictions eased in Auckland, it was looking forward to welcoming new and familiar customers when possible. And for those inclined to leave hidden messages, Mr Mattock said: “We’ll leave a notepad there so you don’t run out of paper”.
LET US KNOW: If you know who the letter-writers are, contact kelley@valleyprofile.co.nz. By KELLEY TANTAU