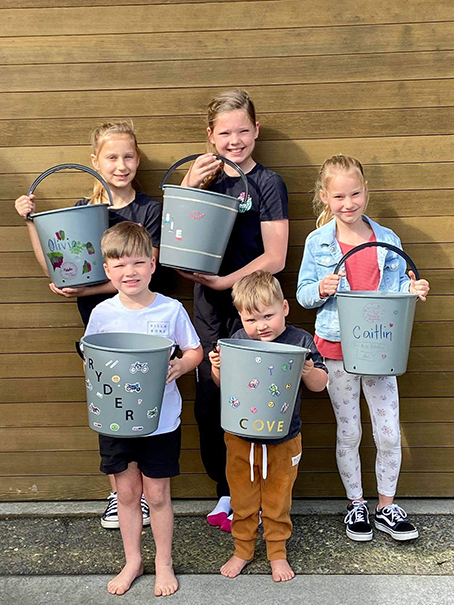 The Aitcheson family’s annual tradition is a little different, but never fails to bring the family together. KELLEY TANTAU reports

The time is right to start up a quirky family tradition that pairs potatoes with plastic buckets.
Michelle Aitcheson and her family, all from Thames, take part every Christmas in a “potato in a bucket” growing competition.
The simple rule is that one whole potato needs to be planted inside a bucket. After that, she said, anything goes.
“Schools have always done potato-in-a-bucket competitions, and I just thought, let’s do it too.”
The tradition started back in 2019 and had become quite competitive, Michelle said.
There are 13 participants within the family, aged from three years to 83 years, and before this year, Mac the American staffy took part, too.
“Mac’s just recently passed away, so this year he’s going to have a memorial bucket,” Michelle said.
“Every year, he had a bucket, but instead of a potato in there, there’d be packets of M&M’s or pretend poo. The kids love it.”
There are four generations of Michelle’s family taking part, and four families all together.
She said the tradition was a bit of fun before Christmas.
“We’re all busy during Christmas, and it just acts as a little bit of a catch-up before some of the family goes off on holiday, or some of us work through.
“It’s the busiest time of the year, so it’s just about relaxing and getting together.”
The friendly competition also sees prizes awarded for: most potatoes grown; least potatoes grown; biggest potato; smallest potato; heaviest potato; and the oddest shaped potato.
This year, Mac’s memorial prize will be for the heaviest potato yield overall.
“Everyone gets one potato and a bucket, and the only rule is that the potato has to be planted in that bucket and the potato has to be whole.
“After that, you can do what you like, whatever you think might make your potatoes grow better,” Michelle explained.
They use a variety of potatoes called ‘rocket’, which can be harvested anytime between 70, 80, or 90 days.
Eighty days from October 6 is Christmas Day. And while none of the Aitcheson family were gardening experts, Michelle said the tradition was an “easy, cheap” thing to do.
“It’s cool to make traditions, and hopefully my grandchildren that are all young now will be able to do the same thing with their families,” she said.
“It’s something they can look back on and be happy about.”