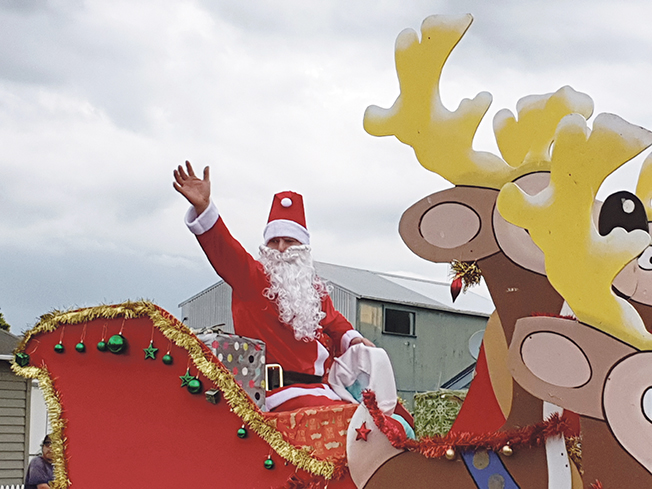 Santa will return to Ngatea this year after the annual Santa parade was cancelled in 2020. Photo: SUPPLIED

A newly-formed committee of keen volunteers will bring Santa back to the Hauraki Plains this Christmas after the annual Ngatea Santa Parade failed to get off the ground last year for the first time in decades.
Committee member Shannon Stratford said though this year’s Christmas on the Plains event was still in the planning stages, it will include a Santa parade on December 11 at 2pm through Ngatea to the Hauraki Plains College outdoor stage for Christmas in the Park, where there will be food and entertainment on offer.
The annual Santa parade didn’t go ahead last year after volunteers who had organised it for more than 20 years retired in 2019 and new volunteers weren’t found in time to run the event.
“I think it was just a bit disappointing that there wasn’t one last year… but it actually takes volunteers,” Mrs Stratford said.
She decided to get the ball rolling a few months ago and the group is currently in contact with Hauraki District Council to organise consent.
“All I did was simply ask a question on the Ngatea Noticeboard [Facebook group]: ‘are there any groups doing the Santa parade this year’ and a whole pile of people put their hands up and said ‘we’ll join a committee’. Once we got that committee together, we found out the high school was in the process of doing a Christmas in the Park… so we joined the two together,” she said.
This year’s event will be slightly different, with more of a focus on entertainment rather than the activities held by Lions in the past, she said.
“We just want people to focus on sitting down and enjoying some music… we’re going to have food stalls and people can bring a picnic or get something to eat there and sit down and enjoy.”
Students from the college, Hauraki Plains primary schools and the Brianna Maree School of Dance in Ngatea will put on performances during the event.
“It’s not just for Ngatea, it’s the whole Hauraki Plains area. It includes Kerepēhi and Kaihere, Kopuarahi, Waitakaruru, Pipiroa – all those areas can come together as a community and have a good, fun time.
“We’re really trying to encourage the whole town to really get into the Christmas spirit, especially after Covid, we probably need that even more than ever.”
DETAILS: Christmas on the Plains, December 11, 2pm. To enter a float, or find out more, email: shanandsi@xtra.co.nz.