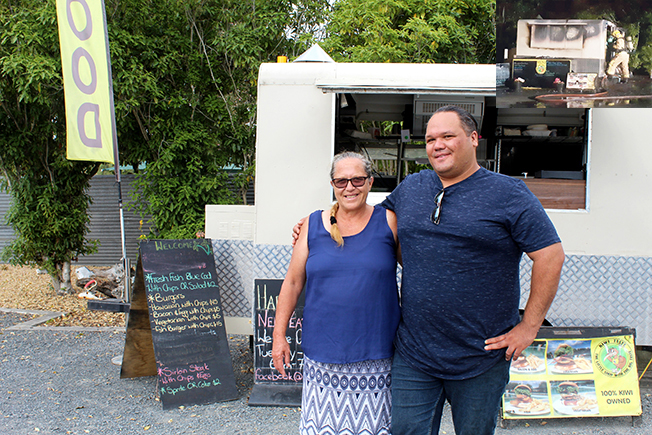 A popular food truck said to have “the best blue cod in town” by celebrity chef Simon Gault has gone up in flames. KELLEY TANTAU reports

The Kiwi Taste food truck, established by mother-and-son duo Rhonda and Max Panirau in February last year, caught fire recently at the Miranda Holiday Park where the food truck is based.
Max told The Profile he was still unsure how the fire started, but that it came at a pretty unfortunate time.
His dad Leo and mum Rhonda had both been unwell, with Rhonda recently in hospital in Auckland and Max manning the fort back home.
He had recently bought a new “better, safer” deep fryer, too, and had also cancelled their insurance for a “little bit of breathing room” financially.
He said the universe had a funny way of knocking you down a peg.
Back in January, New Zealand chef and restaurateur Simon Gault took to social media to praise Kiwi Taste’s blue cod as being “the best in town”.
“It’s the best kept secret,” Mr Gault said. “It’s the best blue cod in town, well, the whole of the North Island really.”
After the fire, the star chef posted about Max and Rhonda’s plight on social media, saying it was “very sad news”.
“This was one of the very best places to visit for fish (blue cod) and chips with salad, and of course their epic burgers. Let’s see if we can give a little and help this fantastic mother and son team back on their feet,” he wrote.
The ethos for Rhonda and Max’s business was “good food served with a side of banter,” but their hospitality extended far beyond dishing up plates of fish and chips.
They built their food truck by hand and when last visited by The Profile, it was missing a microwave, as the pair lent it to a couple staying at the park who required something to heat up their baby’s bottle.
Now it was mother and son in need, Max said he felt a little “ashamed” accepting money from people offering help through a Givealittle page set up by Miranda Holiday Park’s Kerry Wicks – of which donations were flowing in.
The fundraiser to purchase a new food truck has already received around $11,000 of its $35,000 goal.
“It’s definitely humbling, and while I always had faith in people, it does show all of those little touches you had on someone’s experience,” Max said.
“To other people it might not look like much, but I really love [Kiwi Taste]. It gives me a sense of purpose.”
Max understood it would cost more to repair the truck than it would to buy a new one, but hoped they’d be back up and operating as soon as possible. He said they might need to change the name from Kiwi Taste to Phoenix Taste, because they would “rise from the ashes”.
To donate, visit: givealittle.co.nz/cause/kiwi-taste-up-in-flames.

Stay at home order in place for Kaiaua/Whakatīwai