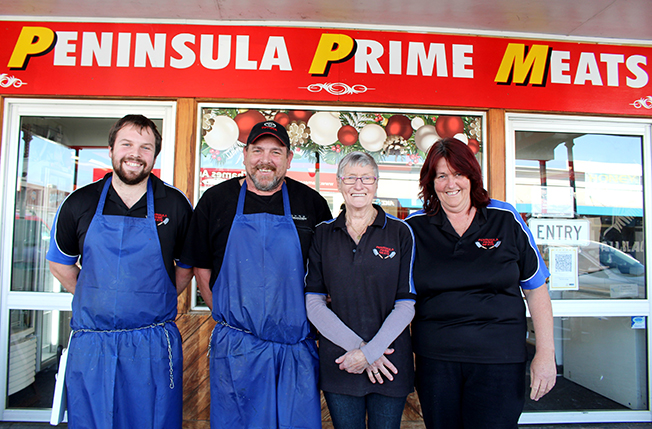 For a quarter of a century, Rob Lee at Peninsula Prime Meats has made sure the product that goes out the door is top-quality.
The Thames man bought the butchers on Pollen St 25 years ago, when there were four butchers in the town. That number had since halved.
But the trick to maintaining a strong business was not only ensuring products were of a high standard, but also keeping up with the times.
The butchery started using biodegradable meat trays more than two years ago, and hoped to soon get in biodegradable cling film.
They made sure to stock the usual favourites, but also incorporated locally-produced items such as honey, mussel fritters, fresh pet food, and eggs.
Their unique flavour of sausages proved to be a big hit, too.
“The sausages are our biggest seller,” Rob told The Profile.
“Our Marmite and cheese flavour was part of a radio competition and it was voted the most popular.
“That was about three or four years ago but it’s been popular ever since.”
They also have a blue cheese and beef flavour, as well as savoury leek, and every fresh product is processed in the store.
Rob, who is “Thames born and bred”, bought the business when he was 25 from Flo Crawford, who still helps out at the butchers. Michelle Kentish has been working there for more than 10 years and the butchery also has an apprentice, Phillip Smith. They weren’t able to trade throughout any of the country’s past lockdowns – with the government deeming butcher shops “non-essential” – but Rob said they had seen a lot of support from locals once alert levels dropped.
“Supermarkets have always had a monopoly, but the niche market is coming back. New Zealanders don’t eat the volume of meat like they used to because of cost, so quality and variety is essential. Thames and the peninsula have always been loyal,” he said.
“We’d like to thank our customers who have stuck with us after Covid and for their 25 years of support. If it wasn’t for them, we wouldn’t be here.”

High demand for food during lockdown