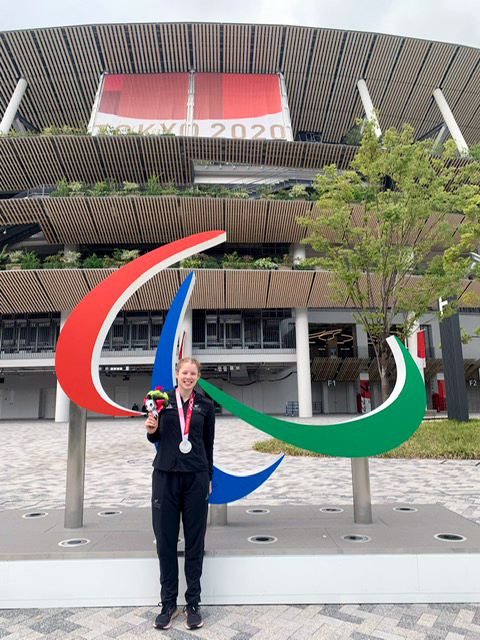 Danielle Aitchison has arrived back in NZ with two medals around her neck after competing in her first ever Paralympics. KELLEY TANTAU chats with the country’s 211th Paralympian as she recuperates in MIQ.

It’s Danielle Aitchison’s fourth day in managed isolation at an Auckland hotel, and both she and mum Tracy don masks as they answer the door to get their temperatures taken.
After passing their first Covid-19 tests, they were given blue wristbands that offered them 45-minutes of outdoor exercise, but it’s raining in Auckland, and the pair predict much of the day will be spent inside studying.
“Mum and I have gone overseas or to national competitions within New Zealand, so we know how to travel together without getting on each other’s nerves,” Danielle says.
The pair are close, with Danielle crediting her mum as one of the most influential people in her career, while Tracy has always instilled that if you never try, you never know.
Now, Danielle has become New Zealand’s 211th Paralympian after success at the Tokyo Paralympics saw her clinch a silver and bronze medal in the women’s 200m and 100m T36 sprint, respectively.
“I was really happy to be out there,” Danielle said, “and I enjoyed racing with the girls, so when I got the silver medal it was more the icing on the cake.”
Covid-19 restrictions meant Tracy watched the events unfold from her Hamilton home.
“I was bursting because I knew how much effort and work Danielle has put into her training. She’s made a lot of sacrifices,” she says.
“There are days when she doesn’t feel like she wants to go out and train, there are days when the weather is absolute sh*t outside, and yet she puts a jacket on and off she trots.
“So that first silver medal… she was finally being rewarded, and I knew what it meant to her.”
Danielle was born with severe jaundice, two uncommon types of cerebral palsy (athetoid and ataxia), and 80-90 per cent hearing loss.
Tracy was told her daughter would likely suffer brain damage and be in a wheelchair.
However, after being inspired by the 2016 Summer Paralympics in Rio, then-16-year-old Danielle turned her attention to athletics for the 2017 Halberg Junior Disability Games.
Danielle, who grew up in Patetonga, moved to Hamilton a few years ago to pursue a university degree and to focus on her sport, joining the Hamilton City Hawks athletics club in 2018.
She has been training with coach Alan McDonald while she juggles her studies at the University of Waikato.
“I didn’t think [the Paralympics] was possible when I was younger because I was competing against able-bodied kids and I wasn’t up to their level, so I was quite sad that I wasn’t able to achieve what they were all achieving,” she says.
“But now that I’m in the Paralympics, and to have been able to try different sports that were more suited to my disability, I’m super proud of how I’ve coped and how I’ve taken up the opportunity.”
Danielle spent her 20th birthday – her first birthday away from family – in Saga, Japan, almost two weeks before her first race in Tokyo.
She was surprised with notes and letters from loved ones

back home, and a cake organised by her travelling companions.
But the realisation she was about to compete on the Paralympic stage didn’t hit her until she walked through Tokyo’s Olympic Stadium to practise block-starts before the full competition began.
“It was the biggest stadium I had seen and there was no one there,” she says. “I couldn’t imagine if someone was there because it was so big and so surreal.”
Danielle, who completed her schooling at Kaihere School and Hauraki Plains College, has tricks to get into the right mental state before a race, including avoiding her phone, and reciting mantras.
“I do have a music playlist which is upbeat that me and my best friend made.
“It brings back good memories and it gets me in a good mood,” she says.
She hopes to inspire people, whether they are disabled or able-bodied, to give different sports a go and “aim for the stars”.
“I know that the Paralympics have had so much interest from people who have a disability asking how they can get involved,” Tracy says.
“It opened up their world, and they saw things that they never thought were possible.”
Danielle is now setting her sights on the 2024 summer Paralympics in Paris, France.
This time though, the whole family wants to be by her side.
“I don’t want to watch another Paralympics on the couch,” Tracy says.
“It is a lot of hard work,” Danielle adds, “so you have to be committed to making the dream come true. At the end of the day, it’s all you.”