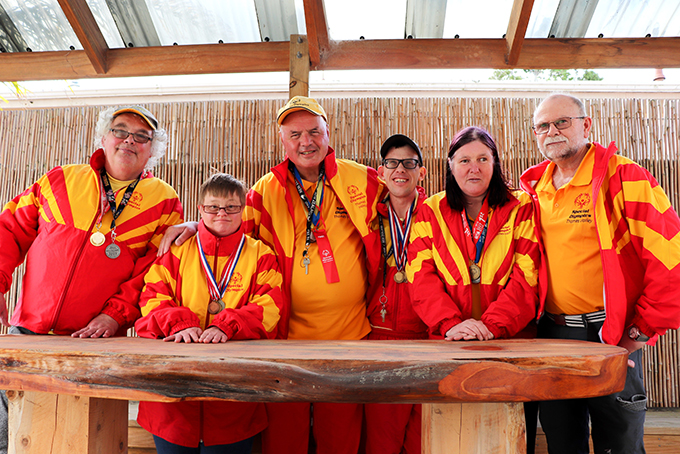 Six athletes from the Supported Life Style Hauraki Trust are looking forward to representing the district when they participate at the Special Olympics at the end of the year.
Special Olympics Thames Valley have 14 athletes attending the National Summer Games in Hamilton from December 8-12, competing in four sports: athletics, bocce, indoor bowls, and swimming.
Six of the athletes are from the trust, and they include Carla Van Deventer (swimming), Henry Munro and Simon Ashby (bocce), Jonathan Read (athletics), and Kim Forrest (indoor bowls).
Bocce coach Murray Thomas said the athletes have been training weekly, depending on the sport and the season, in the build-up to the event.
“We’ll start bocce in the spring, Carla has been continuing her training in the gym and the pool, and Jono has been training in the gym over winter and he’ll be training on the track soon.”
In August, Special Olympics Thames Valley also hosted a Tier One (one-day) regional event in Ngatea, with teams from Counties Manukau, Rotorua, North Harbour, Tauranga, and Howick-Pakuranga attending.
These events were useful in seeing how the athletes performed in a games environment, Murray said.
There were four main levels of events within the Special Olympics: local, regional, national and international.
“To qualify for the nationals, they have to complete 10 hours weekly training in the 10 weeks leading up to an event, and then they complete the Tier One, then Tier Two, which is a two-day event, and if everybody is comfortable with that, they qualify to do the nationals, which is a four-day event this year,” Murray said.
Held every four years, the National Summer Games is Special Olympics New Zealand’s largest national event and one of the country’s largest multi-sport events.
More than 1300 athletes, 450 coaches and up to 600 volunteers from all across New Zealand will compete in four days of competition in 10 sports across eight Hamilton venues.
Special Olympics Thames Valley will be sending a coaching staff of six to the games to join the athletes, who come from all over the district and are aged from 21 to 65.
For many of the athletes, it will be their third summer games, Murray said.
And they all agreed that making new friends and meeting new people was the highlight of the event. Each athlete pays $500 to compete at the summer games, with Special Olympics Thames Valley relying on the support of its volunteers and fundraising efforts to make the event a reality.
To find out how to donate, or to keep up with the athletes, find Special Olympics Thames Valley on Facebook.