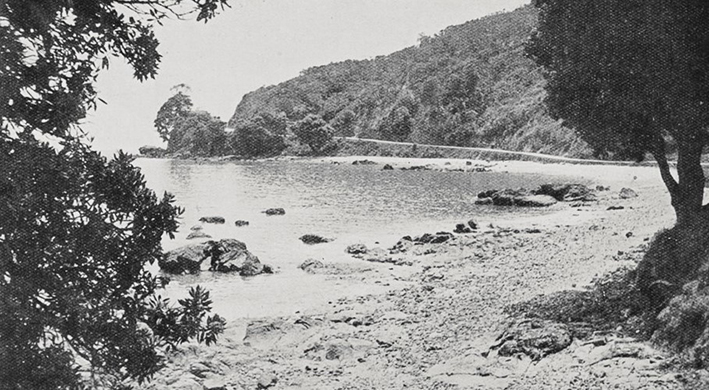 1922
Awatery warehouse was the latest arrival at the Ngatea wharf. A sign announcing ‘Floating Warehouse and General Store,’ printed in large letters was nailed to the mast of a launch. The little vessel was crammed with a large assortment of clothing, boots and other goods.
Also at Ngatea the Debating Society discussed whether the town or country girl made the best wife in the country. Mr Wright advocated the town girl and Mr Blakemore and Mr Jenkins supported the country girl. The speeches were very amusing; Mr. Wright securing the majority vote for the town girl.
The Paeroa Beautifying Society carried out a number of improvements during the summer, and the results of its efforts were most gratifying. The flower beds in the main street did exceptionally well and a very picturesque band rotunda at Wharf St had been built. The rotunda was a fine building brilliantly lit with electric lights. The society also acquired a lease of the railway property and its energies were to be spent in smartening that portion of town. Other Paeroa improvements included the installation of an aerial metallic cable telephone system. Unsightly wires were done away with and there was now just one cable. There were 144 lines connected with the Paeroa telephone exchange.
The Netherton ferry needed a new driving rope as the old one was almost worn out and had to be regularly spliced. There were hopes a cheap type of electric bell could be installed at this ferry which would be a great boon to the travelling public as it would enable a person on the opposite side of the river to ‘ring up’ the ferry-man at any time of the night. Despite the Thames Coast being advertised as a health resort, a very great menace was presented by the disposal of night soil. Some residents were not burying it, but depositing it in the sea. There were over 40 residences down the coast that used a night soil service. The majority of residents took precautionary measures, while visitors did not and usually left the deposit for other people to empty. The council was asked to provide a sanitary service along the coast using a closed pan system, and supplying depot at Waiomo flat. A plain and fancy dress ball held at Kōpū was a decided success. Carloads of visitors arrived from Thames, Matatoki and Puriri, while a full launch arrived from Turua. Fancy costumes were humorous and clever and the judge, Mr Rennick, had great difficulty in picking the winners. About 80 couples were on the floor when the dance commenced, and dancing was kept up until a late hour. The music was supplied by Doidge’s orchestra. At 10pm, a most dainty supper was provided.

Santa Claus to return to Ngatea