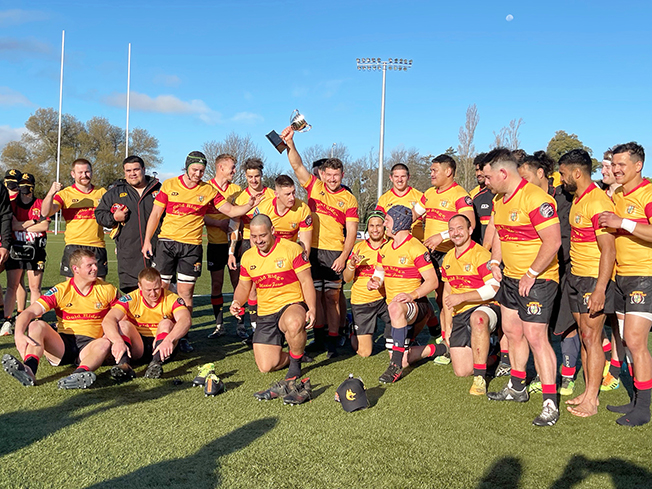 The Swamp Foxes celebrate their win over Wairarapa Bush on Saturday. Photo: SUPPLIED/TRFU

Thames Valley opened their campaign in the 2021 Heartland Rugby Championship with a well deserved 42-10 victory over Wairarapa Bush at Masterton last Saturday.
In doing so they became the inaugural winners of the Presidents’ Cup, the trophy presented by Ross Cooper for competition between the two provinces.
Conditions were perfect on the artificial turf at Memorial Park but both teams would have been dissatisfied with the high error rate due to a lack of recent match play.
However, the Thames Valley forwards, ably led by Captain Connor McVerry, were in control for most of the game and it was this factor along with some ill discipline by the home team which led to the Swamp Foxes’ victory. Telly Hemepo and Josh Kaho scored tries for Thames Valley in the first half with Todd Doolin adding a penalty goal and a conversion.
Wairarapa Bush managed a converted try and a penalty to make the halftime score: Thames Valley 15 Wairarapa Bush 10. All the points in the second half were scored by Thames Valley. Doolin kicked a penalty goal to extend the lead to 18-10 and in the 51 st minute ill -discipline resulted in Wairarapa Bush receiving a red and a yellow card.
The home side did not learn from their mistakes and nine minutes later lost another player to a red card because of a head high tackle on Te Aroha Cobras flanker Ben Stephens who was carried off the field. On Sunday Ben was reported as being in good spirits, eating well and displaying limited symptoms.
Valley put on the pressure and Josh Kaho went over for his second try. There was no conversion and Thames Valley led 23-10. Wairarapa Bush were back to fourteen players for the final ten minutes but the Swamp Foxes showed their class by running up nineteen points during this period. Doolin, Sione Vakakapuna Etoni and Luke Masirewa scored tries, two of which were converted by Doolin.
This was a bonus point win for the Swamp Foxes. Next Saturday they travel to Ruatoria to play East Coast.