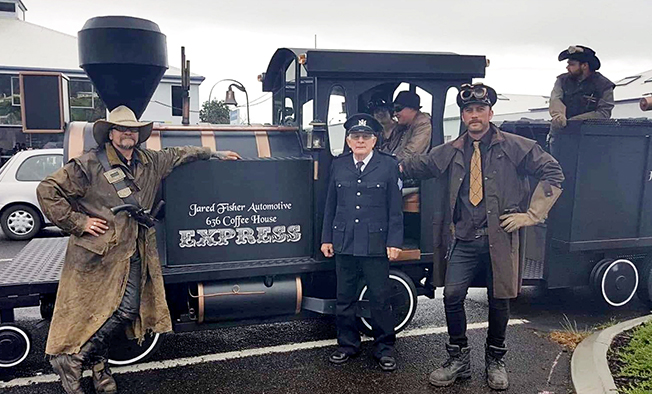 An “icon” in the Thames motor industry has been remembered as a good man, and a man who had not only strong faith, but a mischievous sense of humour.
John “Johnny” Paynter died on September 14 after a short battle with cancer.
He was known around town for his love of cars, his Christian faith, and as the owner of Hauraki Motor Services, and on Friday, friends and loved ones gathered to remember the man who “loved every minute” of his 85 years.
Born in 1935, John, with his parents and his two older sisters, lived on a farm in Te Mata. He went to school at Tapu, before the family moved to Tauranga when John was six.
His interest in cars started “way back then”, Pastor Weston Finlay said, and John could remember some of the families who invited the Paynters home after church on Sundays – one of them being Mr Monk, who had a Buick 8.
The family moved back to Thames in 1949, and John went to Thames High School.
Every morning at assembly, the “train kids” from Hikutaia, Puriri, and Matatoki would interrupt part-way through, and John’s attention was always drawn to a “young blonde by the name of Anne”.
The two eventually wed, and at the time of John’s death, had been married for 63 years.
“He always dreamed he’d one day own an American car like Mr Monk, and he also dreamed that he’d take this blonde for a ride in that American car,” Pastor Finlay said.
John also had a hobby of birdwatching, and while lots of other boys used to climb trees and pinch eggs, he used to watch the birds as they hatched and inspect the progress of the chicks in their nests.
“One day, he came home with a baby thrush that had fallen out of the nest, and he hand-reared that and when Calf Club day came along, he had the thrush sitting on his shoulder as they did the parade of pets at school,” Pastor Finlay said.
After school, John started an apprenticeship at A&G Price. While working at the foundry he opened his own car yard, where Bin Inn now sat along Pollen St. A few years later, the yard moved to where Fresho’s now was, before John moved to the current Hauraki Motor Services site in the early 70s.
Paul Saunders, from Saunders Mitsubishi in Thames and on behalf of the Motor Trade Association, said John was an “icon” in the motor industry in Thames, having worked in the town for around 65 years.
Only a few weeks ago, when the district was under alert level 3 restrictions, John called into Saunders to pay for a car.
“We talked outside and I said: ‘Don’t worry about it, we’ll sort it out in level 2’. But he said: ‘No, laddy, I want to pay for it now’.
“So, he gives me his eftpos card and pin number,” Paul said.
“That was the trusting of him… he was a true gentleman, an icon, and a good man.”
John’s children also spoke at the funeral, which was live-streamed and watched by more than 110 people.
His daughter, Susan, said her dad “danced to the beat of his own drum”.
“Only a couple of weeks ago, dad was chasing his hair down the main street,” she said.
“And a couple of months ago he found a lump in his neck and he was rubbing lemon juice on it. He reckoned it was going down.”
Susan said for John, when he drove anywhere, it wasn’t about getting from A to B – it was about the motoring experience in “a car that he loved with a woman that he loved”.
She recalled a 2006 incident that ended up in the Whanganui Chronicle, in which John and Anne’s car caught fire as they were driving to Palmerston North.
But that wasn’t the only time John made the paper.
His son, Barry, also recalled a time when John pulled a shark from the ocean using sheer determination, a chain, and the family car.
“We, as a Christian family, believe that while we will miss him, we’ll see him again in heaven. We’ll miss him, but one day we will meet again.”
John was led out of the Twentymans chapel to the song, Onward, Christian Soldiers while stuffed Pink Panther toys, which John was fondly remembered for collecting, stayed sitting in their chairs, saying goodbye.

Santa Claus to return to Ngatea