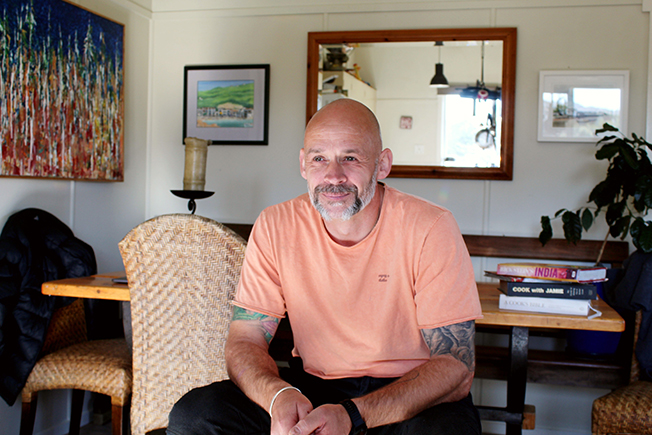 Dan Wheway, from Waikino, will return to his career as a chef, but this time, he’ll do it in Antarctica. Photo: KELLEY TANTAU

Dan Wheway’s summer is going to look a lot different this year.
Instead of gazing out at the rolling hills of Waikino, he’ll be staring across the polar desert of Antarctica, and instead of basking in high-20 degree heat, he’ll be adjusting to the temperature on what is the planet’s coldest continent.
Dan, 49, has been selected for a minimum five-month stint as a summer chef down at Scott Base, New Zealand’s Antarctic research station.
He calls it his “Midlife Crisis: Part Two’, after his first one eight years ago saw him donate a kidney to his mother-in-law.
But it’ll also be a one-of-a-kind experience, which will see him return to his career as a chef.
Dan has been in the culinary industry since he was 16, starting as an apprentice back home in the United Kingdom.
After moving to New Zealand in 2005, he worked on-and-off for 10 years as a lecturer of professional cookery and professional bakery at the Manukau Institute of Technology (MIT) in Auckland.
After his wife, Jo Wheway, got a job as the principal of Waikino School, he moved down to be with her, telling The Profile he would rather be with the person he enjoyed being with, than work at a job he enjoyed doing.
In the Hauraki, he started working at Mitre 10 Waihi’s trade yard, but at the end of February this year, he and Jo were watching a news segment in which Scott Base was putting the word out for workers.
All it took was a knowing look between the pair.
Dan applied for the summer chef role and was shortlisted. He then went through a Zoom interview and psychometric testing.
“I became, for the first time in my life, quite pessimistic. I found the psychometric testing quite difficult and I just wanted to know whether I got the job or not. It all became very real,” he said. “So when I got the phone call saying: ‘Daniel, you’re successful’, I was so happy. Genuinely, ‘raise the roof’ sort of happy.”
But Dan still had to go through medical and dental checks.
“Being useless as a child with my teeth, and then being a chef working silly hours and constantly tasting foods, I had a crap dental history. I ended up having four fillings and one extraction,” he said.
Now, he’s all set to head down to Christchurch on August 15 for the start of a two-week training and bonding period.
He’ll then be put in isolation for three days and be tested for Covid-19.
Once given the all-clear, he and the crew will fly to Scott Base on September 15.
Scott Base is located 3800km south of Christchurch and 1350km from the South Pole.
From October to February, it is a bustling hub of scientists, staff and visitors, and up to 86 people can be accommodated at any one time.
During summer, Antarctica is also in constant sunlight.
But Dan will go prepared. He’s bought himself a black-out eye mask, he said.
“Being a very organised chef, I always have lists. A month ago, when I thought of something I should take with me, I wrote it down in a book. It could’ve been something as silly as Command hooks to hang things on a wall, or Blu Tack,” he said.
“I even did a test back in March or April, how long a deodorant and toothpaste would last. Then I could take down what I needed.”
Dan said he would miss the Waikino view and the sound of birds, as well as his three children and wife Jo, who he married back in 1995.
Email will be their next form of contact for the next five months.
“Jo has always been my backbone; we’ve always shared everything, and she’s always supported me,” Dan said.
“And I say it’s a midlife crisis, but how often do you get the chance to use the skill set you have to go to a part of the world you could only dream of?” By KELLEY TANTAU

Hauarahi Stream given a helping hand