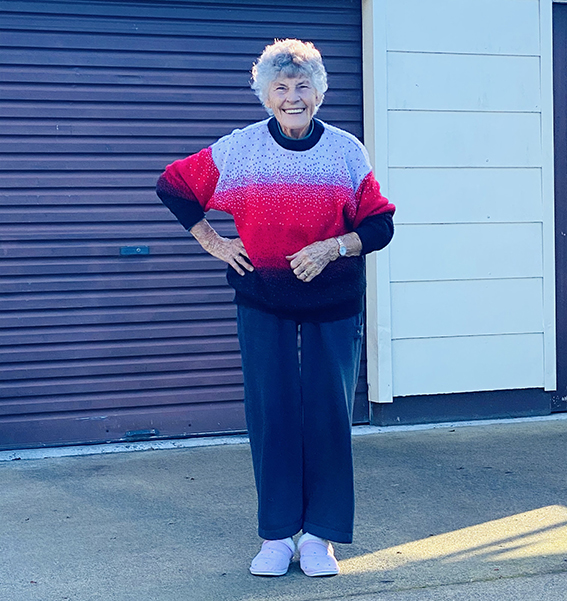 At age 83, Joy Robinson is reputed to be one of the longest living Turua townspeople, after residing in the Hauraki Plains town for more than seven decades. Photo: SUPPLIED

Joy Robinson can remember the plum trees that stood tall around the buildings of Turua.
She and her two sisters would climb them as kids.
“But we’d have to be quick,” she told The Profile. “Because if the boys we went to school with got up the trees first, we didn’t go anywhere near there because we would’ve been pelted with plums.
“We had to be very quick to get up the trees to beat the boys and pelt them.”
At age 83, Joy was reputed to be one of the longest living Turua townspeople after residing in the Hauraki Plains town for more than seven decades.
She moved to Ngatea last week, making way for others to clinch the title.
Born in Westport, in the South Island, Joy moved up north at around age four, moving to a farm “up in the wop wops” of Tahuna.
Her family moved to Waitakaruru and Kopuarahi before they settled in Turua when Joy was aged 10. When they arrived, there was only a butcher shop and two dairies.
Turua was a Māori pā site before European settlement, and in the late 19th century, the village became one of the most important sites of kahikatea timber harvesting in New Zealand when the family of George and Martha Bagnall bought the Turua sawmill in 1875.
Joy remembers sitting on the big concrete blocks of the old sawmill, along the stopbanks of the Waihōu River.
And throughout the years, Joy’s speed was always by her side.
As a Thames High School student, she was a champion in athletics, and specialised in sprinting. She used to go down to the Turua Domain and practise her start and have a “good sprint around”.
At age 65, she was still able to beat her grandchildren in running races.
She said she had made many fond memories from throughout her time in Turua.
“I’ve seen a lot of things, and I used to know everybody in Turua,” she said.
“I used to work in the post office, so it was easy to know everybody then. It was always a good place to live.”
Joy had three sons: Kevin, Gary and Darryl. Her husband, Fred Robinson, resides in Ohinemuri Rest Home in Paeroa, where Joy visits him often. By KELLEY TANTAU