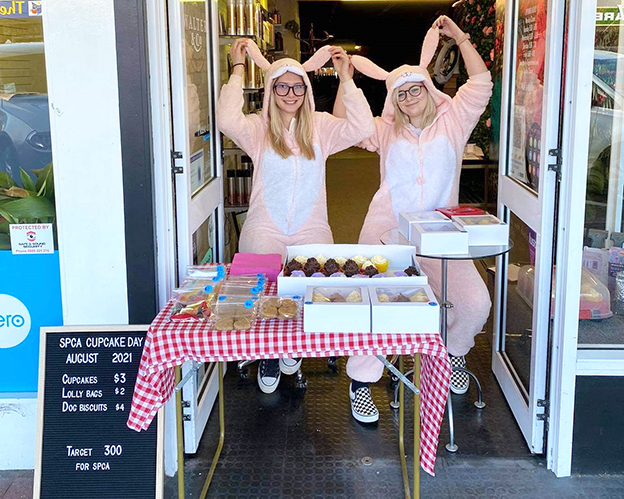 A Thames woman spent her Sunday off baking dozens of cupcakes and homemade dog biscuits for a good cause.
Sophia Grinder baked 76 cupcakes to sell on her day off last week for the SPCA’s annual Cupcake Day fundraiser, along with her friend and co-worker, Rachel Broadbent.
The pair, who work at Walter & Co Hairdressing, raised $360 from their stall outside the salon on August 2.
“The main reason I wanted to do SPCA Cupcake Day this year is because I believe it is an important cause to raise money for,” Sophia said.
“Since animals don’t have a voice, we can help people realise how important animal rescues like SPCA are – from fostering dogs and kittens, to taking in abused and neglected animals and giving them a quality life that they hadn’t had before.
“Raising the money helps pay for their vet bills and treatments and to help feed them and find them homes with lots of love.”
Sophia said she had rescued pets from the SPCA and other rescues in the past.
“They have been the best companions and furry friends for myself and our family. I think it is important to support animal rescues as they are in it to help care for animals and provide them the best life possible, with help from us.”
The SPCA encouraged animal lovers at workplaces, schools and clubs to roll up their sleeves, pop on an apron, and bake a difference for thousands of animals who needed help, after last year’s Cupcake Day appeal was severely impacted by the Covid-19 pandemic.
Like many other events last year, SPCA’s Cupcake Day fundraiser suffered the effects of the pandemic. As a result, just half the number of usual participants took part, resulting in a major funding shortfall.
SPCA Chief Executive Andrea Midgen said the event was a great chance for workplaces to come together for a small act of kindness that would make a big difference to animals in need.
“It doesn’t matter whether you’re a master chef in the kitchen or your idea of baking starts with a packet of cake mix, Cupcake Day is a fun and easy way to help New Zealand’s most vulnerable animals,” Ms Midgen said.
The SPCA said it required additional funding more than ever after the government declined the Inspectorate’s request for additional financial help in this year’s budget.
The SPCA’s Inspectorate was responsible for rescuing sick or injured animals, investigating welfare complaints and prosecuting those who abused or neglected animals, she said.
“That’s why we really need as many people to take part in our Cupcake Day fundraiser as possible. We are so grateful for the support we receive and appreciate every single dollar.”
DETAILS: For more information or to donate, go to: www.spcacupcakeday.co.nz. By TERESA RAMSEY

Students make paper with a purpose