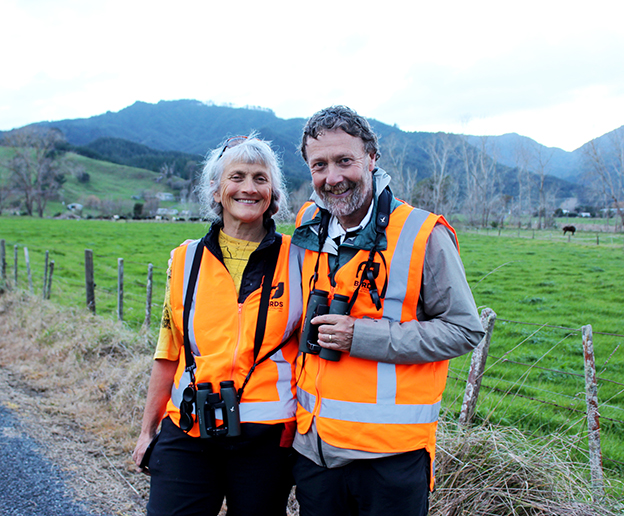 Walking along rural roads, staring through binoculars, and peering down at their phones means Wendy Hare and Nigel Milius are always asked the question: are you lost?
That’s what happened last week, when the husband-and-wife found themselves watching birds throughout Puriri’s Neavesville Rd.
The pair, who live in Cooks Beach, are part of Birds New Zealand’s national citizen science project, the New Zealand Bird Atlas. Its aim is to map the distribution of all the country’s bird species between 2019-2024.
As part of the project, the whole country has been divided into 10km squares, Nigel said, and a block of 24 squares made up the southern and central Coromandel areas. “I set myself a little project of trying to make sure each of those 24 squares get five hours of attention in each season of the project,” he said.
“I’m also trying to use it to explore bits of the Coromandel I’ve either never seen before or have not been to for years.”
Along Neavesville Rd, the pair spotted New Zealand pigeons (kererū) and bellbirds (korimako).
People can contribute their bird sightings to the NZ Bird Atlas eBird portal, and Wendy and Nigel said experience was not a prerequisite. Even logging findings from the back garden would be of help, they said.
The pair usually work as wildlife guides on expedition cruise ships, mostly venturing through the polar regions.
With Covid-19 putting a halt on many forms of excursions, Wendy, who is also involved with the Pūkorokoro Miranda Shorebird Centre, said it was fortuitous Bird Atlas was currently active as it kept them “entertained endlessly”.
“I got into birding when I started travelling in my early 20s,” Wendy said.
“I was always interested in wildlife, but it wasn’t until I went overseas, got into birding, and came home and realised that the bird life in New Zealand was, on a global scale, right out there.
“We have species that are so different from anywhere else in the world and essentially, birds are really where it’s at in New Zealand.”
Bird Atlas will become the go-to authority on the state of birds in Aotearoa, providing up-to-the-hour data that will guide and influence national and regional Government conservation policy planning.
“While it’s really great to be able to find the bitterns, the fernbirds, and the banded rails, it’s also really good to get lots of data about blackbirds and sparrows and spotted doves and things in the back garden, too.”
DETAILS: To find out more or to learn how to get involved, visit https://ebird.org/atlasnz/about.