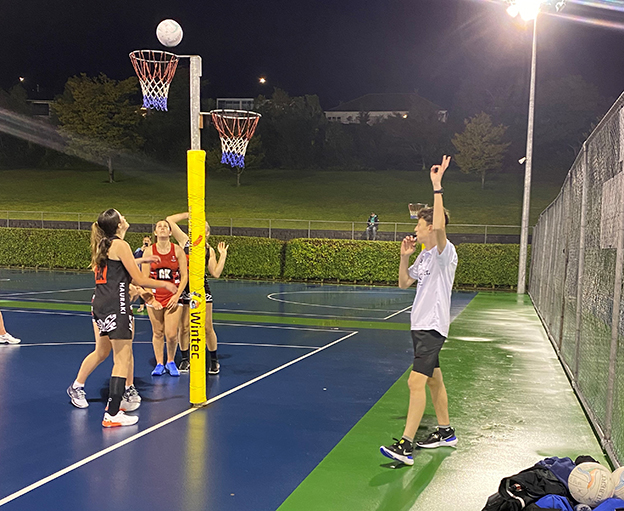 Reefe Benny, 17, was introduced to netball umpiring “out of the blue” three years ago. Photo: SUPPLIED

For Reefe Benny, netball umpiring “came out of nowhere”.
As a 15-year-old Hauraki Plains College student, he only picked up the whistle after “taking the p*ss” and pursued it for the fitness and the chance to talk to girls his age.
Now three years and a myriad of games later, he’s found a passion for the sport he never knew he had.
Reefe, who is deputy head boy and the junior academic leader at the college, started umpiring as a Year 10 student after his family took part in the Hauraki Plains Netball Centre’s summer competition.
Last month, he umpired at the 2021 Netball New Zealand Under 18 champs, but before being able to attend, he had to pass a “yo-yo” test, which assessed his ability to keep up around the court.
“In the Valley, the Friday night leagues are fast, but when going to Under 18s, we find it gets faster and the games become a lot more flowy and move from one end of the court to the other, so you have to be able to take off and stop at full speed,” Reefe told The Profile.
When he started umpiring, Reefe said he wasn’t aware of the pathways that could follow, but after undertaking more assessments and gaining more experience, he began umpiring at Upper North Island Secondary Schools tournaments, and in 2019, umpired at the Under 16s North Island championship. “It came out of nowhere. In the past, I never thought I was going to be a netball ref, it just happened all of a sudden,” he said.
“Originally, I really enjoyed it for the fitness, and it gave me something to do, and I got to talk to girls my age. Now, the higher up I’ve gotten, I’ve found I genuinely have a passion for the game. At the Under 18 level, it’s really good to watch.”
At the higher levels, he’s also had to learn to deal with dissent on the court.
“I’ve had one incident which was in a domestic league in Hamilton, and I copped a bit of slack there. But I sent them off, and they came back on with an entirely different attitude.”
Reefe said umpires can give players a caution, a warning, a suspension, and an “ordering off” – similar to a red card handed out in rugby.
“Cautions and warnings do happen quite often, but I’ve only ever given out one suspension over my three years and it was for dissent,” he said.
Reefe has applied for a bachelor of health science and a bachelor of science at Auckland University, majoring in biomedicine, and hoped to still make time for umpiring when he wrapped up his final year at high school this year. He encouraged more people to give umpiring a go. “Across all codes, people should get involved more. I think especially in the Valley, where it’s such a small region, the more sports we have with the umpires getting involved will make competition better for everyone.” By KELLEY TANTAU

One of Turua’s longest living residents moves on

Students make paper with a purpose