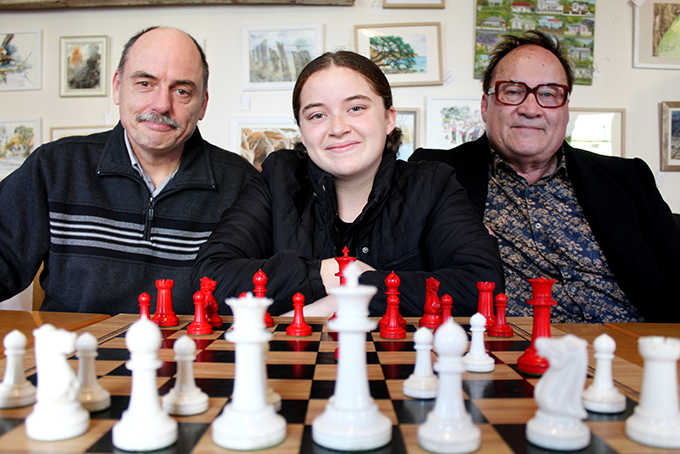 A battle of wits will play out in Thames next month when men and women of all ages face off across a chess board.
The first ever senior and junior Thames Valley chess championship will be held on August 21, and has so far attracted around 50 players from the district, as well as Te Aroha, Te Kauwhata, Papakura, Papatoetoe, and Tuakau.
Two of the Valley’s players set to rise to the occasion are Russell Mercer, president of the Thames Chess Club, and Emma Thorburn, a 15-year-old Hauraki Plains College student.
“I like the fact that it’s a very even start,” Russell said about the game.
“I like the battle of wits,” Emma added. “Out-strategising someone is the best, and you always have to work for it.”
Emma started playing the board game in Year 9, spurred on by a desire to beat a cocky friend. She went on to play her first tournament around three weeks later and won the title of ‘Best Girl’. She was unbeaten at the Waikato Regional under 18s during Term 2 this year, and won bronze in the Auckland Girls’ under 16 competition.
She heads up to Counties Manukau every fortnight to play, and has the dream to one day participate in the sport professionally, while Russell has been involved with the Thames club since its inception more than a decade ago.
The August tournament was the brainchild of Ron Lanning, a chess savant from Auckland.
He started playing the game 49 years ago, in much the same way Emma did – wanting to take a mate of his down a peg.
“I went to the school library, got out every book they had, and started studying [chess] until the tide turned.” He said much like Emma and Russell, he had a passion for chess. “I really want to kick off that there is something for players in this region to work towards,” he said.
“As I’m finding out, there’s a lot more people here that play chess but aren’t part of the Thames chess club.”
There were a dozen or so players involved in the Thames club, ranging in age from seven onwards.
Both Ron and Russell said it was great to see young people becoming involved in the sport.
“Size and age really has nothing to do with chess. A young person can beat any person, and that’s quite a big plus,” Ron said.
“We want to let as many people know that there are opportunities for all ages to be involved in a sport which is not expensive and can be played by anybody.”
The tournament is free to enter, yet there will be monetary prizes and trophies up for grabs, as well as the title of Thames Valley champ.
DETAILS: August 21 at the Thames War Memorial Civic Centre from 9.30am. Those interested in participating can contact Ron: email ron-lanning@xtra.co.nz or Ph 027 212 8232. To join or get in touch with Thames Chess Club: email thameschessclub@gmail.com. By KELLEY TANTAU

Plea for help to get Loki back to school