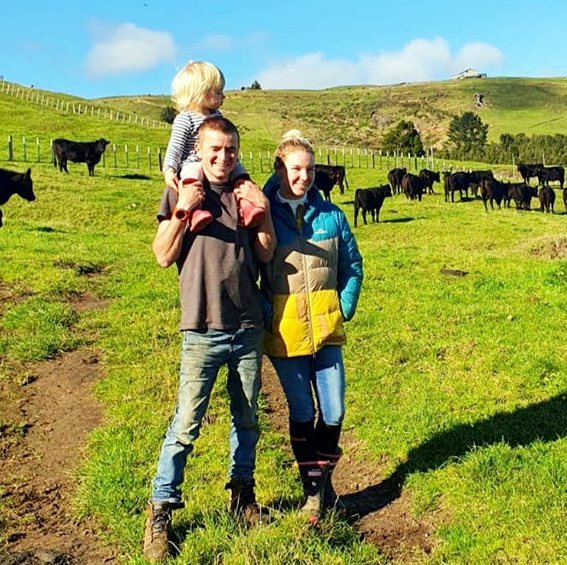 Paeroa farmer James Lambie takes 75 pills and does two hours of physiotherapy each day for cystic fibrosis. He’s hoping that will soon end if a cystic fibrosis medicine that currently costs $400,000 a year is funded. KELLEY TANTAU reports

A Hauraki farmer says Pharmac’s funding assessment for a new cystic fibrosis medication is “fantastic news” for sufferers.
James Lambie, a beef farmer from Paeroa, was diagnosed with cystic fibrosis (CF) as a child. Amidst the Covid-19 pandemic last year, he was vocal in calling on the Government and Pharmac to fund a drug called Trikafta to help him and more than 500 others suffering from the disease in New Zealand.
Now, pharmaceutical company Vertex has submitted its application to Medsafe and Pharmac for approval of Trikafta, which according to Cystic Fibrosis NZ, worked for around 90 per cent of those with cystic fibrosis.
Medsafe has accepted the application and granted it priority status, while the Government agency Pharmac has started its funding assessment process.
“The fact that Vertex has submitted Trikafta’s application to both Medsafe and Pharmac at the same time is fantastic, and if all goes to plan, it could save months and months in the overall timeline,” James, 28, told The Profile.
He said the advocacy group Trikafta 4 Kiwis, as well as Cystic Fibrosis NZ had worked hard for the outcome, but it was “only the start of a long road”.
“Medsafe and Pharmac could still take years assessing this application, before even talks of a price deal with Vertex come into play,” he said.
“[But] with Vertex opening up the compassionate access route, those Kiwis critically ill with CF at least now stand a chance.”
Cystic fibrosis is a disease that affects the lungs and digestive system. Around 540 people in the country have it.
And, according to Cystic Fibrosis NZ, Trikafta provided significant and immediate improvements for those with the disease by increasing lung function and weight gain, reducing the burden of treatment, improving quality of life, and increasing life expectancy.
It cost more than $400,000 a year, and because the drug was out of the Lambie’s reach, James had to undergo two hours of physiotherapy every morning and take 75 pills a day.
He was working on his farm with his lung function sitting around 50 per cent, which he said continued to decline.
Getting limited oxygen in every breath was also very tiring, he said.
“No one has had an application granted yet at this stage, but in the long run it should mean about the worst 10 per cent of the CF population in NZ will hopefully be granted this medicine while negotiations with Pharmac and Vertex take place.”
In a statement, Pharmac said Vertex had applied for its triple combination modulator therapy medicine to be funded for people aged over six with cystic fibrosis, making New Zealand the first country to receive an application for those under the age of 12.
“Before we can fund any medicine, we need advice from our clinical experts, a deal with the medicine supplier, and enough money in the budget to fund it now and in the future,” Pharmac’s director of operations Lisa Williams said.
Scientific evidence on the medicine will be assessed within the next few months.
“If it makes it to our options for investment list, we’ll aim to fund it when we have money available in our budget. I do want to acknowledge that it is one of the most expensive applications we have ever received,” she said.
Pharmac gets around 40 new medicine funding applications each year. In the past financial year, it funded 14 new medicines.

Kumar’s credits community for its 20 years