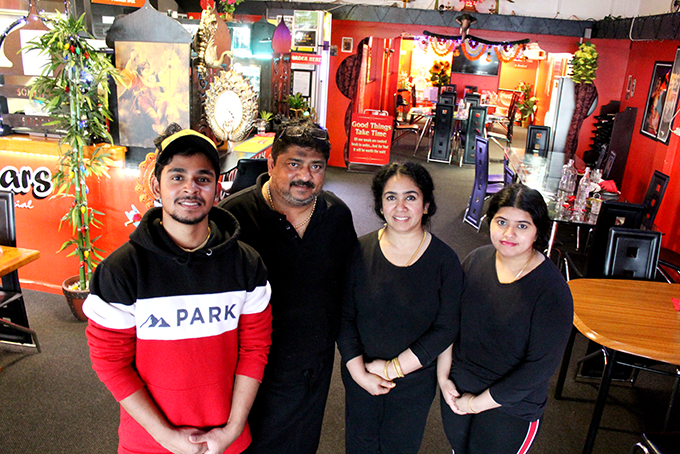 Santhosh Kumar, second left, with his family Sabin, Bindu, and Sabeesha, underneath the iconic Christmas lights in their restaurant. Photo: KELLEY TANTAU

At Christmas time four years ago, Santhosh Kumar hung fairy lights inside his Indian restaurant in Paeroa.
Not wanting to take them down once the holiday season was over, he decided to instead keep adding to the collection, and the eatery now glows – red, yellow, green, blue.
The vision for the restaurant, called Kumar’s Something Special – which has just celebrated its 20th year – had sat inside Santhosh’s head for decades.
Back in India, his family had run bakeries, and Santhosh was a professional baker himself, but when everyone zigged, he decided to zag.
“My ambition was to do something like this; it was always in my blood,” he told The Profile.
“This is what my dream was, and even when we moved here, even though I was working for someone else, my dream was to cook for people and get that appreciation from them.”
Santhosh moved to New Zealand in 1997, heading straight to Thames where he got a job as a baker.
“Within a year or so, I lost my job,” he said.
“There used to be a policy that said: last man in, first man out. That was me, but it was good because that’s how I was able to open my own Indian restaurant.”
He and his wife, Bindu, and their two children, Sabeesha, and Sabin, relocated to Paeroa where Santhosh’s dream was made possible.
However, it wasn’t all smooth sailing.
“When we started, we struggled a little. [People] used to come and open the door, smell the smells, and then shut the door and walk away,” he said.
“You’d see their faces, and they’d doubtfully look at us. But I’m not blaming the town, because they were not used to it.”
In fact, Santhosh credited the town for keeping Kumars afloat after all these years, in particular, around six families who supported him in those first 12 months.
“For some reason, there were a few families that came and supported us. It was not necessarily for the food, I know that,” he said.
“They were coming to help me out.”
Within a year, the Hauraki District became accustomed to the new cuisine, and in 2002, Kumars moved to a bigger premises – the Normanby Rd location they are still at 18 years later.
Santhosh and Bindu soon welcomed their third child, a daughter named Chandana, and all the children have helped out at the restaurant over the years.
“It is a family business,” Santhosh said. “Everything has come together.”
And while it continues to be business as usual for the family, the town could bet on a big celebration at Kumars come 25 years. By KELLEY TANTAU

First all-female barbershop through to finals