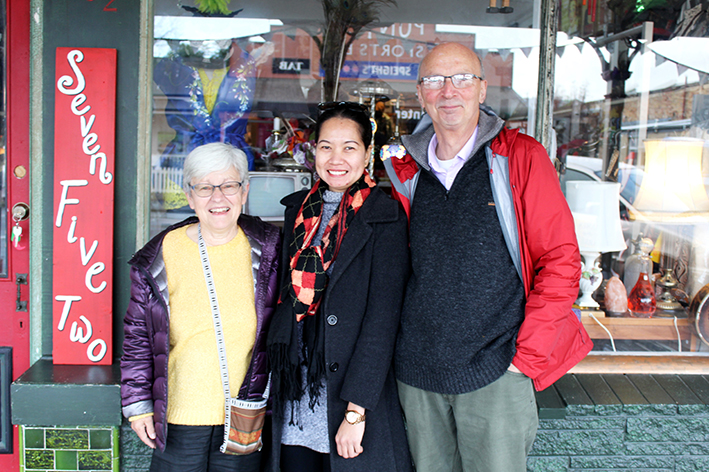 Angelika and Peter Poeschl are welcoming Jaini Stowe, centre, to the managerial position at the Thames Market. Photo: KELLEY TANTAU

Every Saturday, Angelika and Peter Poeschl have been like hosts, welcoming people into what has been their home away from home for the past 12 years.
As managers of the Thames Market, they’ve shown guests around, they’ve introduced people to stallholders and business owners, and they’ve made sure everyone was having “fun”.
“It was a huge step, taking it on. I think it helped me personally to grow. It was also very important to feel connected to the town,” Peter told The Profile.
But now, the pair have decided the time is right to pass the baton on to someone else, and Jaini Stowe, a familiar face among the weekend market, has stepped up to the task.
Jaini, who first had a stall at the market around five years ago, had a fond affiliation for the event.
“The first day I arrived in New Zealand, it was a Friday, and it was horrible weather. The first thing I did the next day was come and see the Saturday market in Thames,” she said.
“That was more than seven years ago, and I was thinking: ‘Look where I am now, I get the Saturday market.’ It’s quite emotional.”
The Thames Market was established by Dianne and Peter McKinnon in September 1995, and last year was its 25th anniversary.
Peter and Angelika Poeschl took over the market 12 years ago, and have watched it go from strength to strength.
They too arrived in the country from their native Germany on a rainy day, and when they got to Thames, they wanted to form “roots” in the town, Angelika said.
Over the years, they’ve made sure the market kept its appeal by asking all stallholders to have a personal input into their goods, a feature Jaini admired.
“The question I’ve been asked is: ‘What changes are you making?’ I don’t think I’ll make any,” she said. “I like how the market runs. We’ll keep it that way.”
The Thames Market will continue to be held every Saturday at the Grahamstown end of Pollen St. More stallholders were welcome, Jaini said.
“I want it to continue, not just for myself, but for the town, and for the two previous managers who put it all together for 25 years,” she said.
“Hopefully I can do another 12 years as well.”
To get in touch, phone 0210 266 7161 or email thamesmarket21@gmail.com. By KELLEY TANTAU

One man’s high-heeled walk for Hospice