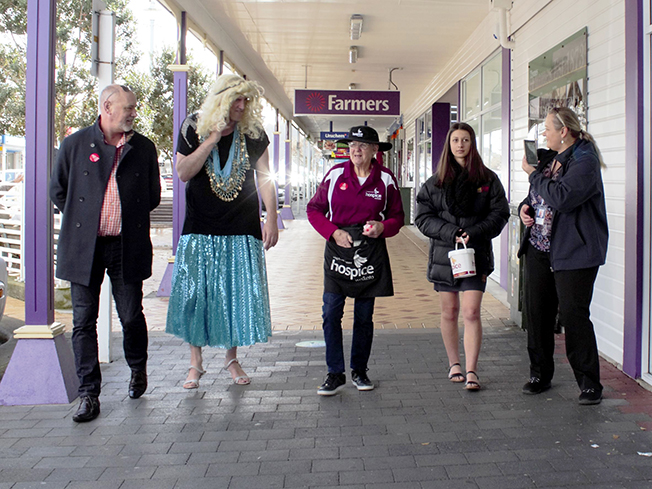 Seeing a 6’4 man wearing a blue sequinned dress and high heels walking down Thames’ main street may not be the most ordinary Friday for some.
But for those who know Mike Plant, a radio host on Coromandel’s More FM, they likely wouldn’t be surprised to learn the daring dash down Pollen St was payback.
The fearless feat came about after Mike and his colleague Michelle Shaw went to a work lunch at Cafe Melbourne in Thames.
Mike, although having taken Michelle to the cafe, left her “abandoned” there once the lunch ended, meaning Michelle had to walk back to the pair’s studio – about 700m away – on her own and in heels.
“She complained about it the next day on air, and I was like: ‘It’s not that bad, harden up’.
“But she talked about the problems on Pollen St; a lot of people say the cobbles are slippery and dangerous, and then she said: ‘Well, you try it’.”
From there, Thames’ Hospice Shop got in touch, as did a number of listeners spurring the breakfast host on. One pledged to donate to the Hospice charity if he wore a dress; another would do the same if he put on a wig.
So on July 9, Mike, in a blonde wig and blue dress and high heels, replicated the route Michelle had taken a week before.
He was joined in support by Hospice Waikato chief executive Craig Tamblyn, as well as volunteers who collected donations for the charity.
From the day, they received $766.
“I’ve got blistered feet with bandages on at the moment, but in the end it was great for the cause,” Mike told The Profile after his walk.
“It wasn’t my first time [wearing heels], but I’d really like to stress it is not a regular occurrence.”
Not only was the walk a “good tourism ad for Thames” – it also raised awareness of the off-kilter cobbles on Pollen St’s pavement, he said.
“We had a lot of emails and texts come into the studio saying to be careful. A lot of the cobbles are not even or smooth, and it was hard, really hard.
“There are a lot of office workers who wear stuff like that, and there’s people who go out for drinks at our local establishments and want to look nice, so it is a bit sketchy for them,” he said.
Mike, whose shoe size is 13, said the heels he wore were brought into town as “reinforcements” from Hamilton.
And although the walk was his just deserts for leaving Michelle at the cafe, Mike said he didn’t have any regrets.
“It ended up being for a great cause, so I don’t feel so bad about it.” By KELLEY TANTAU