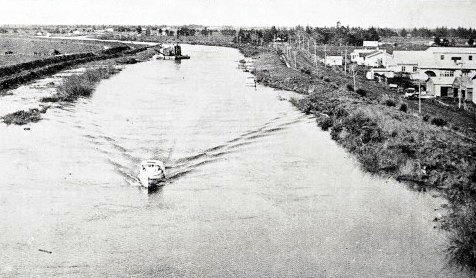 The Piako River in the 1920s. Photo: SUPPLIED

George Avey’s hat was floating in the Piako River. It had blown off as he guided his launch back to Kerepēhi from Thames.
It was around 11.15 on a moonlit night in September 1923 and the hat was quickly found but to George’s great surprise another hat was floating not far from his. George, storekeeper at Kerepēhi, had earlier that day left in his launch for Thames. Also on board were E S Masters, B R Jack, William Parsons and Samuel Dent. On the return trip, as they got to the fairway buoy, the water was calm. At the entrance to the Piako River there was only one light burning and Samuel and Mr Jack were on the foredeck endeavouring to find the channel. Both men came back to the cockpit of the launch then Mr Jack went into the engine room. At the mouth of the river George spoke to Samuel, who was standing up, saying the launch was too near the right bank. Samuel had made no reply.
Now Mr Jack threw the hat into the cockpit calling Samuel by name. There was no response and Mr Parsons said he thought he was in the engine room but on looking they found he was not there. They then took the launch back to the mouth of the river and searched for over two hours from there to Pipiroa but there was no sign of Samuel. They could only surmise that he had gone to the stern of the boat and overbalanced. Samuel, 27, was originally from Whangārei but had been in the Thames district for several years. He was a single man living at Kerepēhi, employed by the Lands Department as a labourer on the Hauraki Plains drainage works. He had served in World War I as a driver. Dragging operations were carried out in the river by police with no result. Eight days later Joseph Antunovich, who worked the launch service between Thames and the Hauraki Plains, was on the lookout for any sign of Samuel and had been all week. About 10.45am near the Shelly Beach bend he saw a body coming up the river on the flood tide. He secured it and brought it to Thames.
At the inquest nothing explained how Samuel fell overboard. It was suspected that while returning from the bow to the cockpit he missed his footing, struck his head on the belting of the vessel and was stunned. This would account for no outcry. Samuel was accustomed to boating and was a powerful swimmer.
The coroner praised Joseph Antunovich for recovering Samuel’s body. Many others would have passed it by. A verdict of accidentally drowned was given, there being no suspicion of foul play and no evidence to show how deceased got in the water.
Samuel was buried at Shortland cemetery, Thames. He left family in Whangārei, including a twin brother, John.