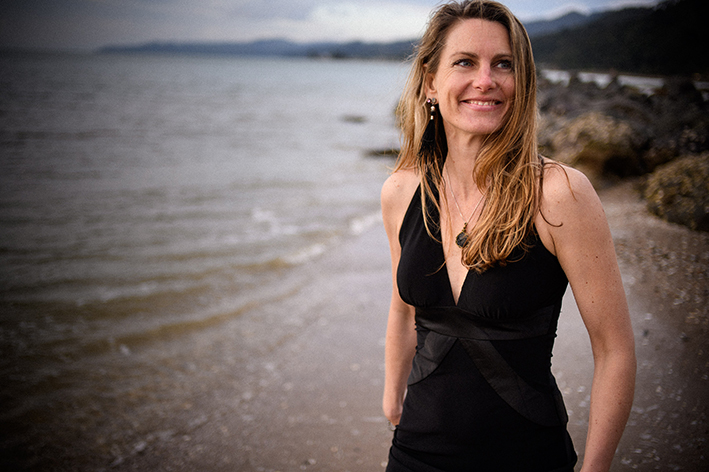 Kara-Leah Grant uses her own experiences with trauma and the Tantrik teachings to help others heal. Photo:SUPPLIED/JEFFREY PACKARD

Kara-Leah Grant knows nobody chooses trauma.
As a writer and non-dual Tantrik Yoga teacher, the Thames woman uses her own experiences with trauma and the Tantrik teachings to help others heal.
“When people start to share their wounds, their pain and their traumas with me, it’s a real honour to hold space for that. The biggest aspect of the work I do is meeting everyone with loving-awareness – not judging anything or anyone,” she said.
“Society is still quite judgemental toward people, for example, who struggle with addiction, but addiction is a symptom of trauma, and nobody chooses trauma.”
Classical Tantra is a methodology for self-realisation, she said, and it supports people to resolve “undigested emotional experiences’’ and unhelpful mental constructs. It began in South-East Asia around 500CE and focuses on liberation from conditioning, as opposed to Neo-Tantra, which was invented in San Francisco in the early 20th century and focuses on conscious sexuality.
Over the last 10 years, Kara-Leah has worked with hundreds of clients and students, helping them identify and uninstall limiting beliefs, and to fully heal and dissolve deep childhood wounds and trauma.
“As children, when something painful happens, the child’s system cannot cope with the intensity of the emotion. The system has all these ways of protecting the child from feeling the pain, so the emotion gets locked away,” she said.
As a child, Kara-Leah experienced trauma, but didn’t fully realise the extent of it until she moved overseas in her 20s.
While there, the psychological defences she had built up to protect herself as a child began to break down.
“I started feeling all this grief over my parents’ divorce, which happened when I was 11,” she said. “And at the time, I’d said it was totally cool and it was all fine, when in reality, I was ignoring my emotional pain. In my 20s, suppressed emotions started to break through. I had an intense Kundalini Awakening that I was not prepared for and it went all the way into psychosis.”
Kara-Leah was committed to Lions Gate Hospital’s acute psych ward in Vancouver, and diagnosed with bi-polar disorder.
“When I came out, I knew I needed a healing approach which saw me as whole, and recognised that I was not just this diagnosis. I needed an approach which understood the awakening process – that was yoga.”
In 2006, she began teaching yoga and over time, that evolved from teaching physical postures, to working with people in the “emotional and mental realm”.
At a 2010 training, Kara-Leah was introduced to the teachings of Classical Tantra for the first time, and in 2015, she committed to doing 1000 days in a row of a Tantrik Yoga practise, which she completed in July last year.
She has been leading workshops and retreats since 2015 which focus on using the tools of Tantrik Yoga to help others liberate themselves from the impacts of trauma.
“One of the biggest things is for people to feel safe, seen, heard, and to feel loved,” she said.
Her next one-day immersion workshop, held on August 7 in Matatoki, near Thames, will focus on trauma and the spiritual path. She will also host a five-day ancestral trauma healing retreat in Taupō from September 13-17. She also does one-on-one sessions with people.
“This approach doesn’t save you, because there is no magic bullet, but Tantrik Yoga offers a new way to relate to life that supports the dissolving and resolving of trauma responses over time. People are not their trauma responses – that’s just conditioning. It’s not who they are.”
For more information on the work Kara-Leah does, or to book for her upcoming courses, visit www karaleah.com.