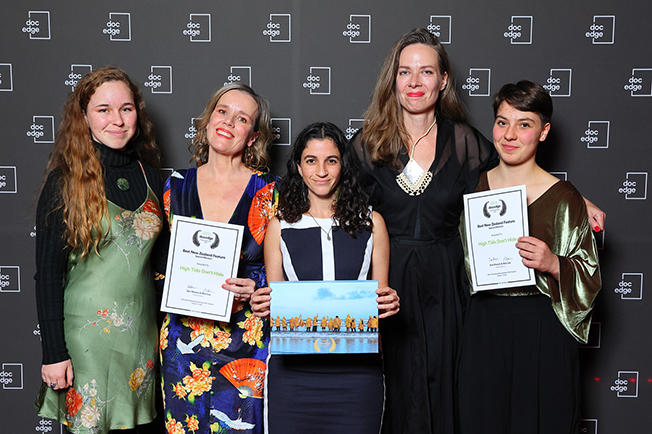 An award-winning documentary film that tackles the looming threat of climate change, interpersonal politics, and the need to just be teenagers, was put together by some of Thames’ own.
High Tide Don’t Hide received a special mention for Best New Zealand Feature as well as won Best New Zealand Editing at the Doc Edge Awards on June 2.
The 80-minute film follows filmmakers Niva Kay, Phil Stebbing, Nia Phipps, and Emily McDowell as they document students’ lives ahead of what became the world’s biggest ever climate change strike.
Niva, from Thames, was responsible for the production, directing, and shooting of key scenes and characters throughout the town, the latter of which included the lives of Thames High students and “film heroes” Lillian Balfour and Helena Mayer.
“I rate these two a lot,” Niva told The Profile.
“I’ve known them since they were quite young, and seeing them grow up and become such leaders in our community, and through this process seeing them become more more aware and sophisticated has been awesome.
“Those young people really are the inspiration and the reason we want to tell these stories.”
High Tide Don’t Hide was dedicated to Jeanette Fitzsimons, who was an environmentalist and former Green Party co-leader. She passed away in March last year, and Niva said it was special to have her included in the doco.
“She pops up in the film visibly a few times, and one of the really nice things specifically about the story we follow in Thames is those intergenerational relationships,” she said.
“It’s been really special to have captured that, and to have remembered that the young people are standing up, but there are also those generations before them that have been fighting this fight.”
The film took two-and-a-half years to come to fruition, and Niva said it has had an overwhelmingly positive response from school screenings.
“Our big goal at the moment is to get the film shown in every high school across the country,” she said, “and already it’s the most popular film in the Docs 4 Schools programme. It had sold-out screenings.”
Docs 4 Schools is run in conjunction with the Doc Edge documentary film festival.
They provide a subscription-based video-on-demand platform for schools in New Zealand and across the Pacific islands. Each film comes with a free teaching resource to help maximise students’ educational experience.
DETAILS: For more info on the festival, visit www.docedge.nz