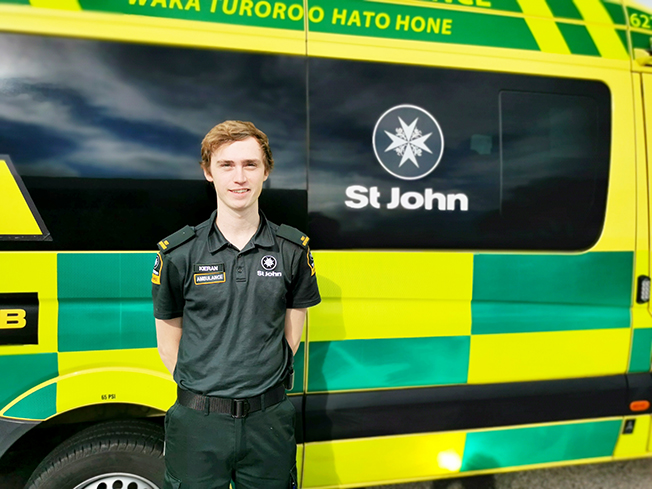 Paramedicine student, Kieran Broadfield, 25, has been training with St John Ambulance in Ngatea as part of a new pilot programme. Photo: SUPPLIED

It took fighting for his life in an 18-day medically-induced coma for paramedicine student Kieran Broadfield to realise his calling in life. He shares his incredible story with KELLEY TANTAU

It was back in 2013 when Kieran Broadfield first became interested in becoming a paramedic.
“For one reason or another” he decided not to go for it, and instead moved back home, to the United Kingdom.
Five years later, he was left “fighting for his life” after a car crash in Cornwall, and was in a medically-induced coma for 18 days.
After waking up, he realised the accident was a “kick up the ass” to do what he originally set out to do.
“It was kind of like: hold on, you need to go and do what you actually wanted to do in life,” he told The Profile.
“Because I had become a builder… and I got put off from going to school for three years because I thought if I was a student, I wouldn’t be earning money, but then I very nearly died and realised that didn’t matter.”
Kieran is an Auckland University of Technology (AUT) paramedicine student, with 18 months left of his degree.
He’s been commuting to Ngatea at least twice a week since May, for a six-month pilot programme being delivered by St John Ambulance in Ngatea.
The initiative was announced as part of the final phase of St John’s Double Crewing Project to see the end of single-crewed ambulances in New Zealand. It trains and develops frontline ambulance volunteers and paramedicine students like Kieran to be work ready once they graduate.
News reports of Kieran’s car crash said the then-22 had a fractured eye socket, fractured right cheek bone, collapsed lung and two broken ribs as well as other external injuries and internal and external bruising.
Kieran said the paramedics who attended the scene helped out in the best way – by doing nothing.
“They called the helicopter off because ultimately, they made the decision that they could get to the hospital in 10 minutes or less, [as opposed to] spending potentially half-an-hour or 45 minutes on scene, messing around, trying to put me to sleep,” he said.
“So I find it very interesting that these two paramedics were very highly-skilled but ultimately didn’t do anything, because they were knowledgeable and experienced enough to know that the hospital was the best place for me.”
Kieran, now 25, wants to obtain his Emergency Medical Technician qualification before Christmas, and eventually go on to become a full-time paramedic. He said he “absolutely loved” the pilot programme in Ngatea – the only station with the programme on offer.
“In cities like Hamilton central or Auckland, you’re only five minutes from hospital, so you don’t really treat patients that much. In Ngatea, sometimes you’ve got patients in the ambulance for over an hour, so there’s much more time to speak to patients, and the treatments you do are different,” he said.
“With Ngatea, there’s a real community thing to it. You’ve got a whole bunch of volunteers in the local community who come to the station in their own time, completely free of charge. You get a real sense of absolute care there.”
Two dozen people have signed up to the programme, with participants working alongside current paid ambulance officers who provide guidance and support as they respond to a variety of emergencies.
St John Hauraki Territory Manager John Armitt said it was “exciting” to be able to offer the participants a career path in their chosen profession.
“The training programme means paramedicine students are getting the vital hands-on experience they need to work as an ambulance officer, while they’re completing their paramedicine degree, and our volunteers who want to further their service on the frontline have the opportunity to do so.”
READ MORE: New rural ambulance launched for Ngatea St John, P4